UPDATE: EVIDENCE FROM HIGH-RISK OPIOID USE AND INFECTIOUS DISEASE INCIDENCE – HEPATITIS A

Hepatitis A, a potentially lethal infectious liver disease, is raging in the U.S., with lethal outbreaks in 29 states and counting since 2016 and with the expectation of re-emergence as a public health threat in all states. Like other infectious diseases with increasing incidence, Hep A is spread partly or largely by use of illicit drugs by injection, often primarily injection of opioids, and by other modes associated with health-compromising stressors of illicit and high-risk injection drug use.

It is, per this recent USA Today news report from Ohio,

spreading mostly among drug users and the homeless. But anyone who hasn’t been vaccinated can get hepatitis A — as Akron health officials are now finding out.
“It’s getting into the general public,” said Tracy Rodriguez, communicable disease supervisor for Summit County Public Health. “It’s scary.”

That is, Hep A and other infectious drug injection-related diseases are on the rise in the U.S. “in wake of opioid crisis”, caused by unrelenting, continuing increases in high-risk opioid use.

And the more gold standard medical cure applied to diseased brains, the more high-risk use and the associated deaths mount. 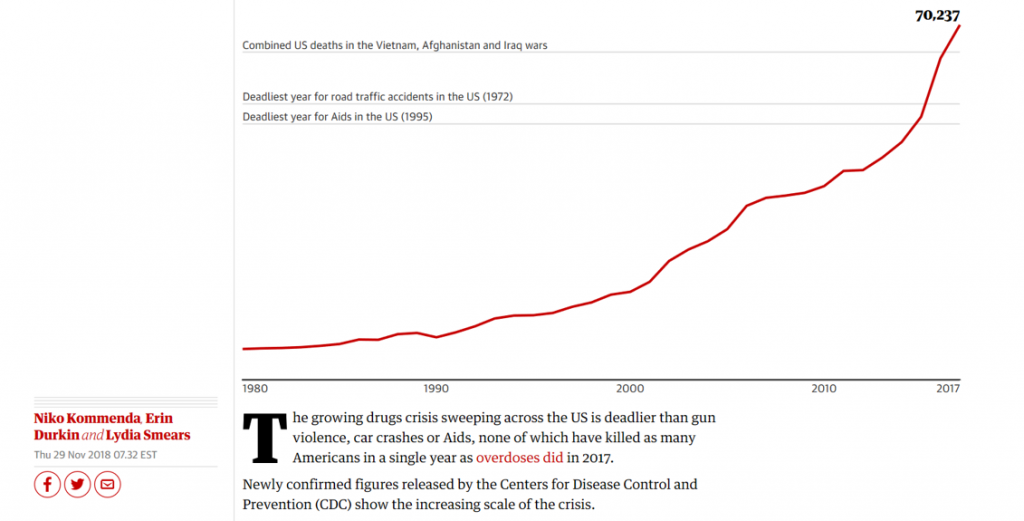 And it’s a pattern, established here and here that – despite efforts of popularizers of the failed medical OST “treatment” – is not explained away by the known risks of fentanyl.

In a variety of settings and nationally, high-risk opioid use as measured by non-lethal overdose incidence has worsened with increasing provision of the medical model fix, against prediction if OST provides benefit. Another, independent measure of high-risk use – incidence of opioid- and injection-related infectious diseases including endocarditis – also shows an OST-invalidating pattern of increase in response to large increases over decades of provision of opioid substitution medicine.

One type of opioid-related infection that researchers are grappling with involves diseased heart valves. Bacteria such as S. aureus can enter the bloodstream as a result of practices such as needle sharing or not cleaning the skin before injecting a drug. If the infection reaches the heart, it can damage the valves. Severe cases can require a heart transplant.
In an ongoing study, microbiologist Cecilia Thompson at the University of North Carolina in Chapel Hill is sequencing DNA from heart valves collected from people who have had surgery to replace diseased valves with artificial ones. Thompson found that valves taken from people who had injected drugs were more likely to be infected with S. aureus than were those of non-users.
Thompson presented her results at the American Society for Microbiology meeting in San Francisco, California, on 21 June. But these are just the latest observations of what seems to be a worrying trend. In a study published in January1, researchers found a tenfold increase in heart infections among drug users in North Carolina between 2007 and 2017. Doctors in the state used to perform less than 10 surgeries to treat drug-related heart infections five years ago, compared with more than 100 now.

There is no need to scramble to understand these trends.

They were predictable from everything we’ve known about the provision of a reductionist medical model fix for the complex non-medical problem of compulsive substance use and affirmed by consistently accumulating evidence that the diversion of public health resources to invalidated opioid substitution approaches and away from evidence-based therapies is driving and worsening illicit, high-risk opioid use and lethal epidemics.

And the more addictive opioid  medical fix dispensed to be diverted, abused, and function as currency and commodity in illicit street economies, the more high-risk use drives overdose, disease, and death. 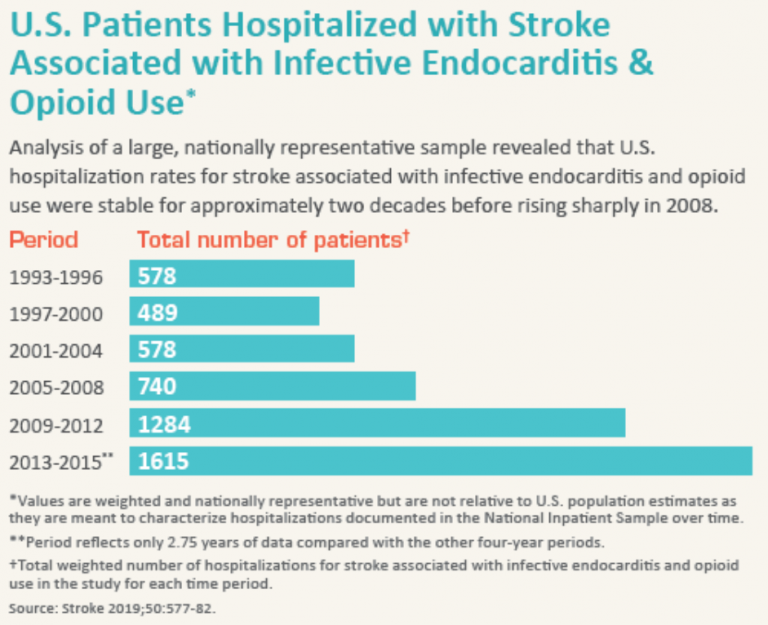 Akron, Ohio is not the only locale affected,

as we would predict from everything we know about problem substance use and the failure of medical approaches to provide benefit for that non-medical problem, those diseases are increasing in prevalence.

Significant, extended increases in medical provision of buprenorphine and methadone OST should necessarily have resulted in the opposite outcome – decreases over the same time period of high-risk opioid use.

In Kentucky, a worsening Hepatitis C outbreak is attributed to high-risk opioid use, by injection – 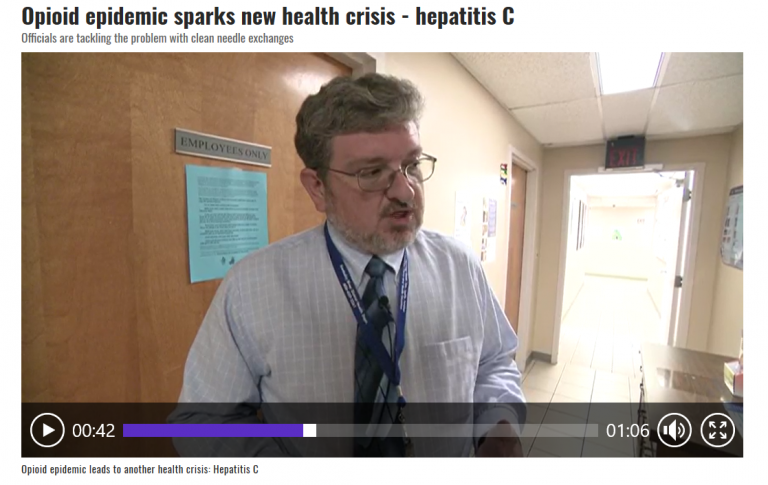 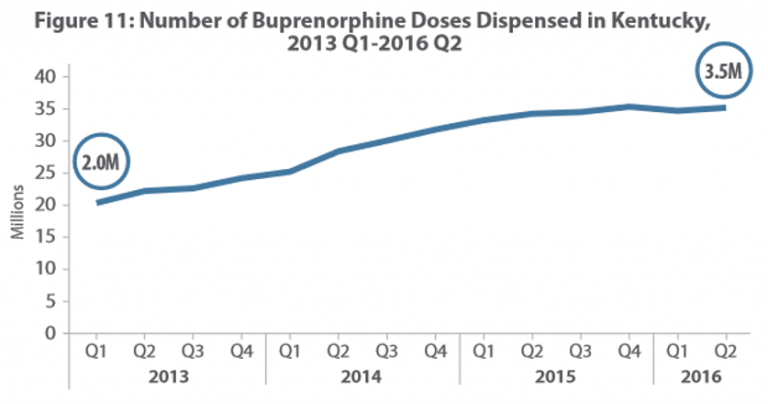 There are signs of a similar pattern in Indiana.

Hep A and other infectious diseases are on the rise in the U.S. “in wake of opioid crisis”, caused by unrelenting, continuing increases in high-risk opioid use, that high-risk use generated by iatrogenic (medical provider-caused) runaway prescription of opioids over decades against all indications, for the non-medical condition of common chronic pain, now driven and worsened by the runaway dispersal of addictive and diverted opioids (methadone, buprenorphine) constructed without evidence of benefit as a medical “treatment” and fueling economies of abuse and high-risk use. And funded fraudulently with public healthcare money.

Against continued rationalizations (collaborative media/industry lies) for the failures of the fabricated medical “fix” for the medically-generated lethal opioid crisis – the increases in injection-related infectious diseases provide determinative confirmation of the predictable harms and failure of never-validated medical fixes for the non-medical condition of compulsive opioid and other substance use.

YOUTH VAPING AND NICOTINE-DIABETES LINK: IT’S NOT GOING AWAY 

“DOPESICK” IS THE NEW HEROIN

IN DELAWARE: PREDICTABLE CONTINUING SURGE IN HIGH RISK OPIOID USE AS MEDICAL CURE FOR HIGH RISK USE IS INCREASINGLY PROVIDED