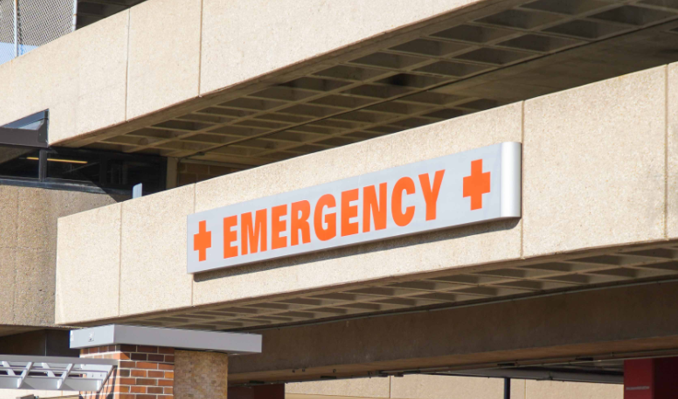 New research affirms a body of direct observations and reports of the ecology, psychology and behaviors driving illicit economies of compulsive opioid misuse “on the street” –

fentanyl is used knowingly, sought out, used with knowledge of its potency and associated risks

according to research from the British Columbia Centre for Disease Control (BCCDC).

The fact more relevant and important than users knowing they are getting fentanyl in the drug they intentionally obtain illicitly is that they know the real risk of high likelihood that fentanyl will be present, whether sought out or not, in any substance obtained on the street. That is, users are choosing – and have been over past years while opioid overdose mortality increases – increasingly to risk overdose and lethal overdose instead of accessing or benefitting from widely and increasingly available substitute opioid medical “treatment” (medical provision of the substitute opioids methadone or buprenorphine) programs, or from hypothesized “Do-It-Yourself” use of diverted suboxone widely available on the street for “treatment” or to avoid high risk use.

High-risk use constitutes lack of benefit attributable to the never-validated medical “fix“.

And they are not retaining in those programs, or do and continue to abuse illicit opioids and other drugs, divert and abuse the prescribed opioids, and engage in high-risk opioid use including injection, as evidenced by increasing rates of injection-related infectious diseases.

But that doesn’t make sense at all in the context of mass consensus assurances from the same medical-media alliance that fabricated evidence to generate the lethal opioid epidemic – that the medical OST fix is effective treatment. Does it? Because available not just from medical providers but on the streets are opioids like buprenorphine and heroin that are much safer and as easily accessible as fentanyl if the user’s purpose and motivation is for withdrawal management while trying to quit, to moderate use, or to manage pain.

Users knowing the risks associated with fentanyl and having been exposed to assurances of an effective medical “treatment” for compulsive opioid use are weighing the alternative of that medical “treatment”, increasingly widely available in medical settings or in “DIY” form on the street, and are sticking with, compelled to continue, high-risk use. At risk of death and fueling continuously worsening mortality and public health costs of high-risk opioid use fueled partly by a street economy that includes prescribed buprenorphine and other opioids as currency and abused substances. New reporting “from the street” in San Francisco in the U.S. affirms that picture of a new fentanyl (and naloxone) evolving culture of high-risk opioid abuse. 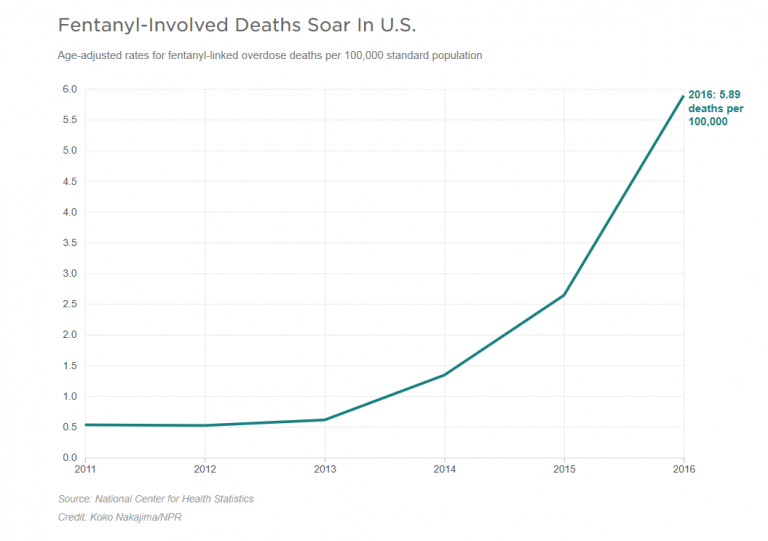 The explanation supported by evidence is the one already established, the one we already know:

the predictable failure and contribution to worsening epidemics, as in generation of the opioid crisis, of medicalization of and provision of medical fixes for entirely non-medical problems. Those medical fixes – opioid pain medications for the non-medical (psychogenic) problem of common chronic pain in the case of generation of the opioid crisis – instead, predictably, are driving and supplying expanding and increasingly lethal street economies of illicit misuse of opioids and other drugs.

As explained in a recent post and recapped below, the emergence of fentanyl on the street, instead of explaining away the medical “fix” of opioid substitute treatment (OST) predictably failing and instead worsening a lethal iatrogenic opioid crisis, instead makes a stronger case for that failure: against the known increased risk of OD and lethal OD the branded, sold, and paid for with public healthcare resources medical “treatment” continues to fuel continuously increasing high-risk opioid use and a worsening epidemic rather than providing benefit. Users are not choosing to access and therapeutically engage in it as an effective therapy. They’re choosing fentanyl instead.

That tragic and predictable result, of course, was predetermined from longstanding, established understanding of the nature of compulsive substance use – determined and explained by the psychology and psychosocial and developmental ecology of: choice, compulsion, behavior, motivational deficits and state, distorted beliefs and inner states driving the compulsive use, unresolved and unmanaged inner distress linked to early trauma and other adverse experiences, and other psychological drivers – and has nothing to do with brain chemistry, manufactured fictional diseases, or medical conditions. It’s a no-brainer.

Consistently and predictably: there has never been credible evidence to support OST as effective

in reducing high-risk opioid use and preventing opioid-related deaths, instead relevant lines of evidence disconfirm that presumed effectiveness.

That’s not a problem for pharmaceutical industries desperate to protect profits, or for a medical industry desperate to distract attention away from the medically-generated opioid crisis and associated deaths and to create and protect a sheen of competence and relevance, authoritative status, and the lucrative “addiction medicine” entitlement system. Popularizing, research-illiterate writers without competence and capacity to critically evaluate the relevant research are willing, as in generation of the opioid crisis, to spin and help brand OST as effective “treatment”, a “fix” for the opioid crisis from entirely inconclusive evidence, in an unfortunate confluence of group think, ignorance, and the power of cultural capital in a post-factual world to create meaning as needed.

a new Purdue Pharma, the necessary confabulation distracting away from the driving forces and failure and predictable harm generated by the medical fix for the medically-generated lethal opioid crisis.

That elephant is the consistent pattern – nationally and at lower population and epidemiological levels – of high-risk opioid use and mortality continuing to increase over years in response to significantly increased provision of the medical “treatment” for the opioid problem: the “anti-addiction” opioid substitutes methadone and buprenorphine (suboxone). 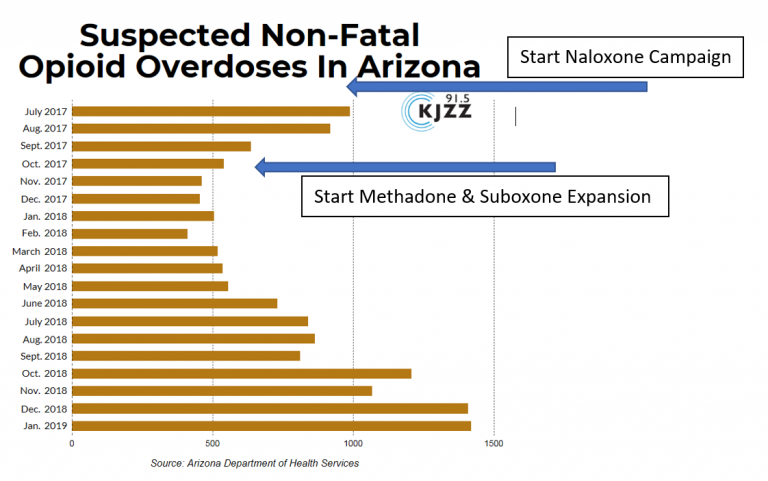 Multiple posts have provided analysis with links to primary research and other sources of why that worsening effect was predictable. And why the successful branding of opioid substitute treatment (OST) as a credible and effective “treatment” – primarily by research illiterate popularizing writers – was never supported by critical evaluation of the claims and evidence. Just as in the media and medical industry collaboration to fabricate the deceptions fueling the opioid crisis.

The attempts at obfuscation, deception, and distraction continue and include the argument that goes something like this: over decades of increasing provision of substitute opioid treatment with methadone and buprenorphine as the effective, evidence-based medical “treatment” for problem opioid use, the associated continuing increase in overdose deaths, high-risk use, and other opioid-related morbidities is explained by the emergence and presence of illicit fentanyl in street economies of drug abuse, masking the known effectiveness of methadone and buprenorphine – the medical treatment gold standard – in reducing of high-risk opioid use and deaths.

The argument is false, invalidated on multiple lines of evidence, described and discussed here in a companion post.

Congruent with that disconfirming evidence, new anthropological observations of behaviors of users “on the street”,

consistently establish that – far from fentanyl posing the threat of a contaminating poison for users attempting to moderate use or benefit from prescribed or illicit substitute opioids – fentanyl is sought out, with known risks, disconfirming the effectiveness of MAT in providing effective treatment that users are inclined to access and able to benefit from.

From the Atlantic piece –

The man was out of his wheelchair and lay flat on his back just off San Francisco’s Market Street, waiting for the hypodermic needle to pierce his skin and that familiar euphoric feeling to wash over him.

The old-timer, who appeared to be in his 60s, could not find a viable vein, so a 38-year-old man named Daniel Hogan helped him. Hogan, a longtime drug user originally from St. Louis, leaned over the older man, eyeing his neck as he readied a syringe loaded with the powerful synthetic opioid fentanyl.

Hogan called the man a “jellyfish,” because most of his veins had collapsed from years of intravenous drug use and he rarely bled when pricked. But the older guy still had his jugular vein, and for Hogan that would work just fine.

Hogan’s hands were pink and swollen, bearing scars and scabs from years of daily drug use and the harshness of life on the streets. But those hands were skilled in the art of street phlebotomy. He slid the needle into the man’s neck and pushed the plunger.

Hogan, who said he had taken fentanyl every day for the past two months, explained that he’d developed a tolerance for the drug, and the dose he gave himself would kill a less experienced user. So he gave the older man only a fraction of that amount.

In case it was too much, Hogan was ready with a vial of naloxone, the overdose-reversal drug.

Grim drug scenes like this play out every day on the streets surrounding San Francisco’s Civic Center—an area that spans the hard-luck sidewalks of the Tenderloin district and the transitional Mid-Market neighborhood, home to the tech titans Twitter and Uber.

The area has become a beachhead for fentanyl, which has killed tens of thousands across the United States and is beginning to make itself felt in California.

The drug, which can shut down breathing in less than a minute, became the leading cause of opioid deaths in the United States in 2016. More and more drug users are seeking it out, craving its powerful high.

Some of those users say they feel a measure of security because many of their peers carry naloxone, which can quickly restore their breathing if they overdose.

Data suggest that in San Francisco, drug users may be reversing as many overdoses as paramedics—or more. In both cases, the numbers have risen sharply in recent years.

THE LETHAL LIE OF “PEER SUPPORT” FOR PROBLEM SUBSTANCE USE (“ADDICTION”)