UPDATE: WORD FROM THE STREET AND INSIDE –

THE BUPE ECONOMY IS ABOUT ABUSE, NOT SELF-TREATMENT

As documented and detailed in a recent full post, it would be hard to identify more nakedly and lethally discrepant accounts of reality than those of America’s opioid epidemic and costly medical treatment for it: 1) from the users – on the streets and in prisons – of the pain killer opioid economy fueling the lethal epidemic versus 2) assertions from the medical establishment supplying the addictive and diverted substitute opioids as a medical “fix” for the crisis.

Newly synthesized information on abuse of methadone and buprenorphine in prisons and communities in Massachusetts and other New England states adds to mounting evidence establishing overall harm from opioid substitution programs (OST) – the primary, publicly funded “treatment” for the worsening lethal opioid crisis.

That medical and “harm-reduction” view – that not just used-as-prescribed but also diverted (“diverted” = medically prescribed opioids that are obtained and used by someone other than the person prescribed to) and used substitute opioids like Suboxone (buprenorphine + naloxone) are providing significant benefit to opioid users as medical “treatment” – is the assertion provided to “Dopesick” author Beth Macy by National Institute of Drug Abuse (NIDA) medical addiction authority and champion of the long-invalidated “hijacked brain” disease model of “addiction”, Nora Volkow. As long as the person is not tapered off “bupe” too soon, the medical “treatment” is generally successful, and buprenorphine that is diverted and allegedly abused, in fact is used by persons in the process of successfully treating themselves for opioid use disorder, to avoid returning to problem opioid use (like heroin) during periods of withdrawal symptoms:

When a person is weaned too soon, his or her relapse feeds the perception that MAT is ineffective, reinforcing unfair and faulty notions about the treatment, said Nora Volkow, the NIDA official, “All studies – every single one of them – show superior outcomes when patients are treated” with maintenance medications such as buprenorphine or methadone, Volkow told me. She pointed out that most patients buying black-market Suboxone are really trying to avoid dopesickness – “and that is so much safer for them than going back to heroin” (from Dopesick, p 222).

Because of these attributes, few people use buprenorphine to get high. Instead, more people use it to prevent withdrawal and to stay away from other illegal drugs such as heroin and illicit fentanyl.

Some leading addiction experts argue that self-treatment with buprenorphine can save lives because it is used in place of more dangerous substances that are blamed for the continued rise in overdose deaths.

“It was not diverted buprenorphine that’s responsible for our current situation,” says Dr. Zev Schuman-Olivier, an addiction specialist and instructor at Harvard Medical School. “The majority of people are using it in a way that reduces their risk of overdose.”

Volkow’s confident assertions are repeated by popularizers of the medical and well-funded “harm reduction” industry view, in featured pieces in major media and on social media by medical prescribers of the substitute opioids in opioid substitution treatment (OST), or MAT (medication assisted treatment) programs. Those assertions are authoritative, constructed as informed and credible, and as such, fuel a medical/pharmaceutical industry alliance with the Trump administration, U.S. media, and healthcare institutions to dedicate public healthcare resources to the strategy that results in widespread diversion (below).

Problematically, and portending tragic and enormous waste of public healthcare resources and human life, Volkow’s view, representing the manufactured medical, media and institutional consensus, is not supported. Not by research; not by epidemiology, treatment trends, other information. Not by direct reports of users with nothing to gain by reporting diversion for abuse. And not by continually emerging data and reports on outcomes and results of OST programming, like this recent report on outcomes in communities and prison systems in Massachusetts and other New England states.

Writing in Commonwealth Magazine (without links to original material) describing use of methadone and buprenorphine in correctional systems in Massachusetts and other New England states, Andrew Klein (identified as Senior scientist for criminal justice, Advocates for Human Potential) –

Second, it may be problematic to continue individuals on opioid medication if they are unable or unwilling to abide by the rules. The Middlesex jail, for example, has found that the majority of individuals entering with prescriptions for methadone or buprenorphine are mixing their prescribed medications with additional narcotics, benzodiazepine, and alcohol. A large Medicaid study across New York documented that more than a third of persons being treated for opioids using agonist medication (medication that activates the opioid receptors in the brain) were obtaining narcotic prescriptions outside of their maintenance prescriptions.[i] In one instance, an individual was found to have received 49 prescriptions for hydrocodone, oxycodone, or methadone while on medication assisted treatment for opioids. Both increased doses and mixing of medications while on agonist maintenance can make overdoses more likely.

Studies increasingly reveal that diversion of medication, especially buprenorphine, is the rule, not the exception, in the community. With a study finding that more than 11,000 children and adolescents were reported to poison control centers for exposure to buprenorphine between 2007 and 2016, the last thing jails and prisons should be doing is increasing that deadly exposure in the community.

It must be presumed that these are underestimates of abuse of prescribed methadone, including high-risk abuse with other sedating drugs, unless each program measured comprehensively (and from these reports, these programs did not) a full range of commonly abused substances including in addition to “narcotics” synthetic illicit fentanyl and fentanyl analogs and prescribed medications commonly abused for sedative effect including quetiapine and gabapentin.

The reported widespread abuse points to prescribed opioid substitutes including methadone and buprenorphine being used most frequently for sedative/euphoric effects at elevated risk and potential public health costs, rather than by individuals motivated for reducing dependence and for gains in personal, community and social functioning.

U.S. public health response to the opioid crisis – driven by the medical industry that created it and following failed outcomes for the decades-long French experiment with essentially unrestricted medical provision of opioid substitution therapy (OST) – diverts and dedicates public healthcare funds to the predictably and increasingly invalidated medical fix for a non-medical problem, U.S. media serving primarily as popularizers of the harm-predicting approaches.
Just as major media did in support – by use of transparently fabricated “evidence” – of runaway supply of addictive opioids by doctors to Americans for the non-medical condition of common chronic pain, also with predictable outcomes – 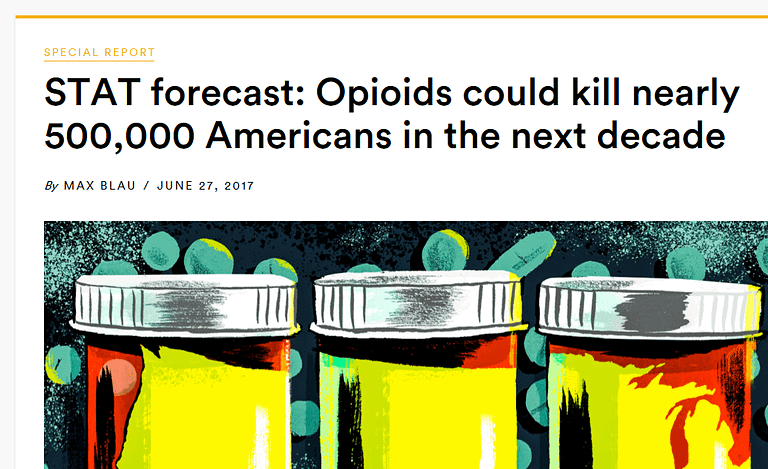