New evidence from Connecticut is part of a consistent, invalidating, predictable pattern that disconfirms benefit attributable to medical provision of the substitute opioids  methadone and buprenorphine in Opioid Agonist Treatment (OAT) programs.

Those increases in provision of the gold standard  medical “fix” for problem opioid use and the opioid crisis – by reducing high-risk opioid use and associated problems including overdose mortality, overdose, and other problems – occurred prior to the dangerously more potent opioid fentanyl having a significant presence in street economies of illicit opioid use nationally and in Connecticut.

Below: The New Evidence Fits an OAT-Invalidating Pattern

Results available from Connecticut including overdose deaths and implementation of a naloxone campaign paint the same predictable picture as from other areas in Canada and the U.S. –  high-risk opioid use and overdose continue to worsen  in response to increasing provision of the medical model fix for the opioid crisis, inconsistent with and invalidating of opioid (methadone and buprenorphine) substitution treatment.

Those additional areas reporting continuously mounting, consistent evidence pointing away from beneficial effects attributable to substitute opioid programs instead to concurrently expanding use of opioid OD death-reversing naloxone as the factor accounting, directly, for any apparent moderation of deaths include –

In Connecticut, over the years 2012 to 2015 heroin overdose deaths – a measure of high-risk opioid use prior to the confounding effects of a naloxone campaign – were increasing significantly in opioid overdoses without fentanyl contributing, a period over which provision of  the gold standard medical substitute opioid treatment for high-risk opioid use had been increasing since at least 2011.

In Bethlehem, Pennsylvania it’s the same predictable pattern: despite (that is, based on relevant lines of evidence, because of ) increases in provision of MAT with focus on OST, opioid overdoses have steadily and significantly increased over past years, but not overdose deaths, the reduction in deaths directly accountable for by increased provision and use of naloxone. These results consistent with and contributing to mounting, evidence: overdose deaths are not a meaningful measure of presumed effectiveness of opioid substitution, because naloxone campaigns account directly for any apparent decreases.

Nationally in the U.S.

Nationally the same picture emerges. The National Institute for Drug Abuse (NIDA) has released data attributing in the U.S a gain in number of potentially lethal opioid overdoses reversed by use of Naloxone as increasing, over 2010 to 2014, from 10,171 to 26,463. The NIDA data, through 2014, is almost certainly an underestimate unless we assume that most reversals, including private, are reported and recorded, and incidence of reversals almost certainly has increased in the interval since 2014 as Naloxone programs have expanded, as in Dayton. At a rate of net gain in potentially lethal OD deaths stopped by use of Naloxone of 4,000 per year, almost certainly conservative, Naloxone appears to directly account for any apparent moderation of opioid related overdose deaths in national trend.

As reported in the opioid crisis special series, provision of buprenorphine OST has been significantly increasing in Victoria, including relaxation of restrictions by the province in 2016 and concerted efforts to start provision of suboxone in ER visits.

Yet since then, there are no signs of high-risk opioid use decreasing, instead increasing or at best not improving, based on levels of emergency medical responses to overdoses and observations of law enforcement. No signs of the expanded provision of medical fix moderating “An epidemic that, despite government acknowledgement and increased resources, is showing no signs of slowing down.”

But overdose deaths, as opposed to high-risk use and overdose, have appeared to level off, and that change is directly attributable, based on recorded incidents of reversals, to a campaign to increase dispersal and use of naloxone: by law enforcement; by emergency medical responders; on the streets; at safe injection sites. 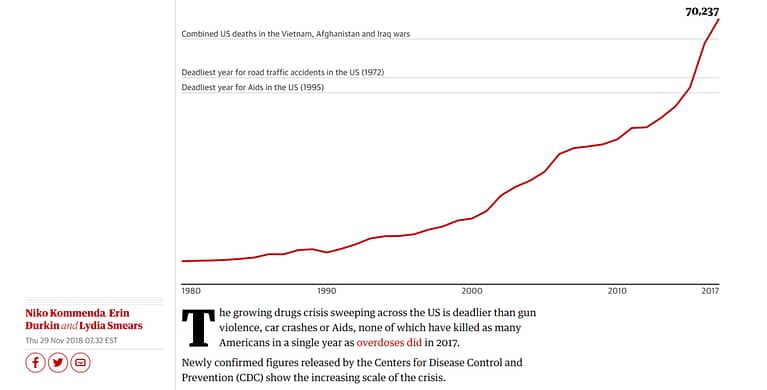 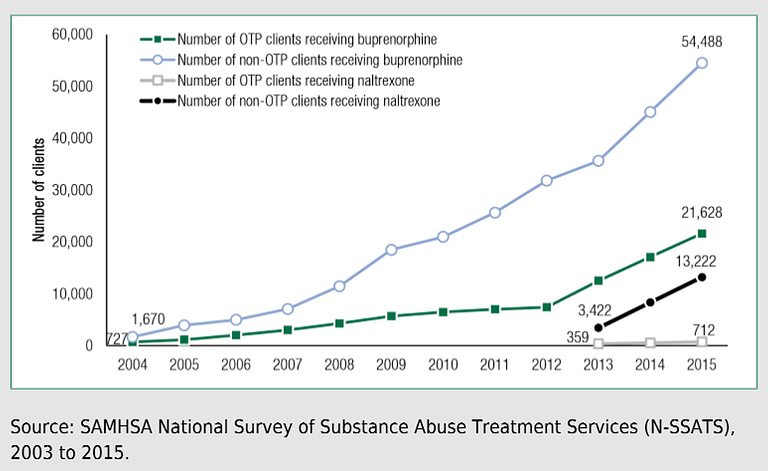 Below: The New Evidence Fits an OAT-Invalidating Pattern

Results available from Connecticut including overdose deaths and implementation of a naloxone campaign paint the same predictable picture as from other areas in Canada and the U.S. –  high-risk opioid use and overdose continue to worsen  in response to increasing provision of the medical model fix for the opioid crisis, inconsistent with and invalidating of opioid (methadone and buprenorphine) substitution treatment.

And it’s a pattern  – despite efforts of popularizers of the failed medical OST “treatment” – that is not explained away by the known risks of fentanyl.

Apart from invalidation by relevant lines of evidence, those arguments are disingenuous, partly because the risks of getting and using illicit heroin or other illicit opioids on the street has become well-known to any illicit opioid user, that use representing a choice to engage in high-risk use instead of accessing now widely and easily available opioid substitutes methadone or buprenorphine whether supplied on the street or by a medical provider. Consistently reported trends in increased use, and overdose by, heroin that may contain fentanyl is stronger and more definitive evidence for harm versus “treatment” provided by MAT with substitute opioids – representing high-risk use with risks known in response to increasing accessibility to and provision of the medical “fix”.

Tennessee is a state hit early and hard by the opioid crisis. The response described in the 2019 Tennessee Department of Health report has included significantly increased provision of the medical “treatment” for opioid use disorder – MAT (opioid substitution treatment OST) with buprenorphine or methadone over the years 2014 to 2018.

Non-fatal heroin overdoses increased rapidly over the years that MAT provision was expanding, 2013 to 2017.

where overdose deaths involving heroin steadily increased over the years 2012 to 2016, decreasing only after intensification of implementation of a naloxone campaign. around 2016. Total opioid-related overdose deaths leveled and then declined over that same time frame. 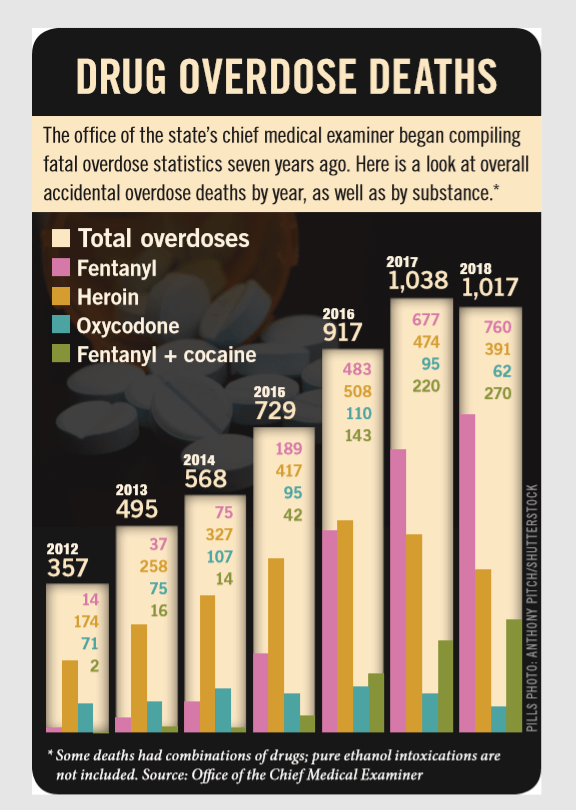 The data from Connecticut allow controlling for any potential effects of fentanyl, 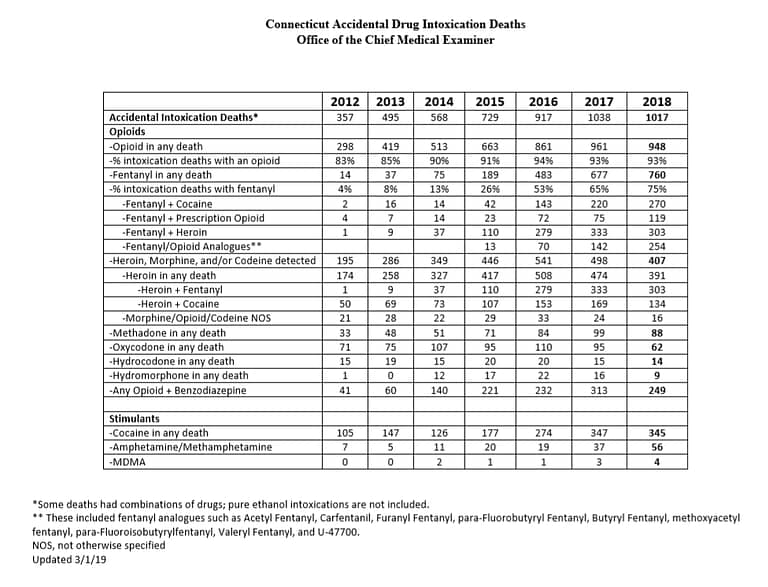 Subtracting OD death counts for deaths with heroin and fentanyl present from those for “Heroin in any death” provides deaths attributable to  heroin in overdose without fentanyl:

That is, over the years 2012 to 2015 heroin overdose deaths – a measure of high-risk opioid use prior to the confounding effects of a naloxone campaign – were increasing significantly in opioid overdoses without fentanyl contributing, a period over which provision of  the gold standard medical substitute opioid treatment for high-risk opioid use had been increasing since at least 2011.

These results from Connecticut, consistent with accumulating data from additional locales and nationally, are invalidating of presumed benefit for problem opioid use and the medically generated lethal opioid crisis from provision of substitute opioids without evidence-based treatment for compulsive opioid use. That was a predictable result, the presumed benefit – as in generation of the iatrogenic opioid crisis – driven by fabricated evidence in a collaboration of America’s top medical and research institutions, public health oversight, and media helpfully along for the ride.

As in generation of the lethal opioid crisis.