In Bethlehem, PA, in Lehigh County hard-hit by opioid abuse and overdose, in Pennsylvania, third in the nation for opioid overdose deaths – 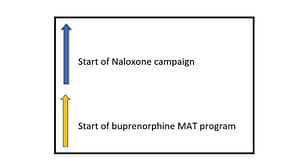 A Naloxone campaign that included widespread distribution and education began in September of 2016 and was immediately followed by a drop in opioid-related OD deaths to zero over 2016, from 3 or 4 in 2014 and 5 or 6 in 2015.

Since the start of that campaign, there has been just one confirmed OD death.

Suboxone use in a MAT program began two months later, with enrollment of a single patient in November of 2016, a factor unable to account for the decline in OD deaths to zero in 2016.

Naloxone, by contrast, prevents OD deaths directly and immediately as soon as it is available to trained individuals, and the campaign begun on a large scale in September of 2016 would reasonably account for the drop in OD deaths to zero.

Since the start of that campaign in September 2016, Plumas County recorded reports by patients of 14 potential OD death reversals, almost certainly an under-report according to Wilson, because these were voluntary reports, not based on surveys.

With an average of around 4 – 5 OD deaths in the preceding years of 2014 and 2015, the use of Naloxone would directly account for the entire drop in OD deaths.

Despite the dramatic rise in Suboxone prescribing in a MAT program beginning November of 2016, opioid-related Emergency Department visits remained high, with relatively slight decline over a period of a 200% increase in Suboxone use.

From these preliminary results, it appears that the Naloxone campaign, including intensive distribution and education efforts, almost certainly accounted for the drop in OD deaths, with any significant role for Suboxone in a MAT program open to question. The overdose rates for people reporting to the ER in Rowan County and the state have gone down over the past last three years, said Neetu Verma, a grant manager for the Center for Prevention Services.
She attributes the downturn to the availability of Narcan and the introduction of the Good Samaritan Law, which says that anyone who helps a person who has overdosed will not face arrest.
. . .

In December, Dr. John Bream, medical director of Novant Health Rowan Medical Center’s emergency department, said the number of people being admitted to the ER for heroin overdose had decreased going from 162 people during January 2017 to December 2017 to just 68 people during January 2018 to December 2018.
The ER doctor said he believed public awareness was one of the contributing factors for the decline.

Rowan Public Health Director Nina Oliver agrees but says individuals are still abusing opioids at a rapid rate.
“I see this issue getting worse in the nation instead of better,” Oliver said.
. . .

“The amount of babies born with substances in their system has also increased sharply in North Carolina and in Rowan County. These children are now at-risk for multiple problems including medical, mental, and behavioral health issues throughout their life,” Oliver said

And in Bethlehem, Pennsylvania

It’s the same predictable pattern: despite (that is, based on relevant lines of evidence, because of ) increases in provision of MAT with focus on OST, opioid overdoses have steadily and significantly increased over past years, but not overdose deaths, the reduction in deaths directly accountable for by increased provision and use of naloxone. These results consistent with and contributing to mounting, evidence: overdose deaths are not a meaningful measure of presumed effectiveness of opioid substitution, because naloxone campaigns account directly for any apparent decreases.

Despite increases in “treatment” including MAT –

In Bethlehem in 2017, a state grant funded a MAT program at the Neighborhood Health Centers with more than 300 referrals in the first year.

Statewide, provision of buprenorphine (Suboxone) OST climbed significantly over the years that opioid overdoses continued to climb based on SAMHSA data on newly waivered MAT physicians.

First year waivered providers are allowed to dispense bupe to 30 patients, in following years 100. Crunching the numbers, a gain of 70 was used to figure net gain in OST MAT capacity per year. Statewide increases in capacity for LMP-provided OST, in number of patients: Over the period of 2014 to 2017, concurrent with a tripling (187 percent increase) in opioid overdoses, statewide capacity for OST treatment of opioid users increased by 66,270. Figures by county were not available for this post, and it would be unsupportable to suggest that that increase does not represent a significant increase in OST capacity for problem opioid users over those years in the Bethlehem area.

That is, opioid-related overdose increased significantly in response to increases in provision of the medical “treatment” for high-risk opioid use in the Bethlehem area.

The National Institute for Drug Abuse (NIDA) has released data attributing in the U.S a gain in number of potentially lethal opioid overdoses reversed by use of Naloxone

Nationally, as in Plumas County and Dayton, Naloxone can directly account for any and all changes in overdose deaths, and there is no effect remaining to attribute to claimed benefit from provision of substitute opioids.