Presenting physician at 2022 annual medical meeting warns colleagues of their continuing overprescribing, that they “shouldn’t be surprised” at mounting deaths, entertains questions on how to safely prescribe opioids – in 2022

QUESTION: How can this possibly be happening, in 2022?

How can it be that decades into America’s increasingly lethal opioid crisis, decades of CDC prescribing advisories and guidelines and of daily news reports including of continuing involvement of prescribed opioids in deaths, that a presenter at a major medical association meeting would be compelled to express shock and dismay to his colleagues at the levels of continuing opioid misprescribing (91% of U.S. patients were prescribed opioids postoperatively compared with just 5% of non-U.S. patients”), “poor” current medical practice,  the admonition that “we generally overuse [opioids]”?

Why, with clear evidence over those decades of the runaway misprescribing of opioids generating the crisis and continuing to worsen it, has nothing been done to effectively control misprescribing, instead to distract from and protect it?

From the recent article:

SAN DIEGO — While urology and other medical specialties have taken steps to rein in opioid overprescribing, the skyrocketing death rate in the U.S. due to opioid overdose indicates urologists — and other healthcare providers — are not being aggressive enough in implementing safe prescribing practices, according to Benjamin Davies, MD, of the University of Pittsburgh School of Medicine.

“It is almost shocking to say that in 2022, 100,000 people have died over the past year from opioid use,” said Davies during a session at the Society of Urologic Oncology annual meeting. “We are on a slope we have never seen before, and it doesn’t seem to be stopping.”

Davies, who is also chief of urology at the University of Pittsburgh Medical Center Shadyside/Hillman Cancer Center and director of the Urologic Oncology Program, noted that opioid prescribing patterns in the U.S., as well as in Canada, have clearly contributed to the problem. He pointed to a recent study comparing international postoperative opioid prescribing patterns showing that 91% of U.S. patients were prescribed opioids postoperatively compared with just 5% of non-U.S. patients.

“And you shouldn’t be surprised that where the drugs are given, that’s where the deaths are,” Davies observed.

As for current practice in urology, it’s “poor,” Davies said. “I’ve written about it many times. We gave out something like 200% more than we needed to give before we changed our practice.”

There are no surprises here, only the predictable, lethal outcomes of practices in medical and public health systems in collusion with American media and other systems of power that include –

Distortion of research (for example, here and here) to protect status, cultural capital, control of public resources and from exposure to accountability

Collusion with compliant media to gain those protections

Disinclination to practice ethically at risk of patient harm, without consequences, also here 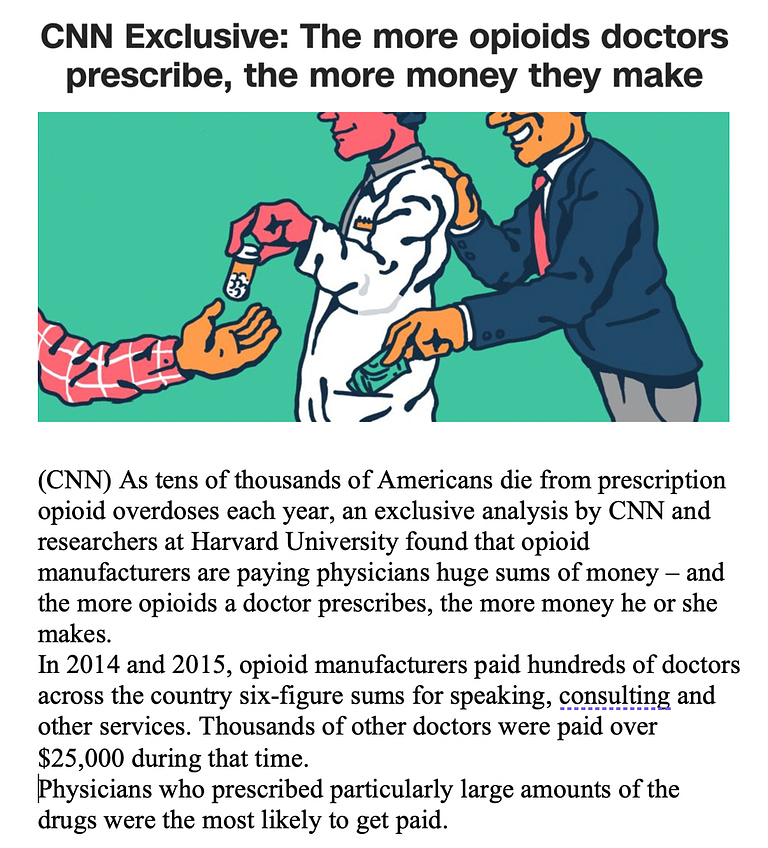 That is, medical misprescribers have protection,

and they know it. They benefit from a collusion of lies, distractions, and scapegoating, driven by cowardice.

After their colleague’s shocked, discordant statements of the obvious, the meeting participants must have felt relief for the words and thoughts that led them down a comforting rabbit hole where outside forces and villains displaced any sense of personal responsibility to practice competently and ethically .

Again from the MEDPAGE TODAY report –

As for why the problem has exploded over the past several years. Davies keyed on two root causes: “deaths of despair” (i.e., due to suicide, alcohol, or opioids or other drug use); and the abusive marketing and targeting of opioids, such as oxycodone (OxyContin).

“abusive marketing and targeting of opioids, such as oxycodone (OxyContin)”

That’s difficult to endorse, given that the abuse consisted of the pill salesmen’s provision to the doctors of very nice meals and large sums of cash, to spread the word – the word from them, pill salesmen working for big pharma, without training in pharmacology, physiology, research or any other relevant field – that the schedule II addictive, controlled substances were safe and effective for all pain.

Meals and cash gifts gratifying enough that the effects of that “abuse” have remained active over the decades of an increasingly lethal crisi, are still active in 2022?

Did the abuse affect the cognitive functioning of America’s medical prescribers? Such that they would lose recall of longstanding evidence indicating against use of the opioids for chronic and most post-surgery pain? The evidence available for decades prior to the runaway misprescribing that has perpetuated the lethal crisis and would have been part of any legitimate medical eduction?