EPIDEMIC AND LETHAL CURE – THE “OPIOID PARADOX” IS ARTIFACT AND EXPOSURE OF THE LETHAL, NECESSARY LIES OF AMERICA’S MEDICAL/MEDIA COLLUSION

As opioid related deaths continue to eclipse comprehensible levels and cogent or credible explanation, the unraveling that is hope for exposure and change begins.

Better control and reduction of over- and misprescribed opioids, an approach heavily invested in and messaged as achieved, should necessarily have evidenced some signs of moderation of the toll of high-risk opioid use that instead has from appearances accelerated.

What else but to define the meaning of that appearance? And who else to define it but the corporate medical, media and institutional forces holding the power and cultural capital that allows creation of fact and meaning? That allowed for creation of an opioid crisis?

We now know it is a “paradox” because we are told it is, the term paradox used to message that American Medicine has been doing what is indicated and right, successfully, AND YET paradoxically, the crisis is increasingly uncontrolled and lethal.

Understood under Wittgenstein’s dictum that meaning is use, its value is clear. We are to know that there is a paradox because there are two contradictory facts: 1) accelerating opioid related deaths and 2) the incompatible yet certainly true fact established by consensus of America’s trusted expert and media class, created by them: that the transparency, credibility and clinical effectiveness of American Medicine’s approaches to the opioid crisis are accurately reported and described, are known to be effective, established by research evidence as such, are “proven” cures for addressing high-risk opioid use driving the lethal epidemic. That goes without saying.

Here it is, explained, in this useful piece –

Nevertheless, fatal opioid overdoses actually increased 300% during that period. The U.S. Centers for Disease Control and Prevention reported that more than 73,000 people died from an opioid overdose in the past year – one person every seven minutes; the highest number on record. Increasing fatalities despite decreased prescribing has been termed the “opioid paradox.”

From this media report, we have gained assurance and relief from undo worries. We now know that a paradox can be combatted. We know that on the authoritative word of America’s trusted institutions and experts, the signifiers of their competence and capacity displayed for us – their credentials. And we now know that the way to combat the opioid crisis and the opioid paradox involve a new approach urged by doctors.

The volume of opioids dispensed from retail pharmacies fell by about 21% from 2008-2009 to 2017-2018, but cuts were not uniform, national prescription records showed.

Changes in opioid prescribing varied substantially by county, patient, and prescriber, reported Bradley Stein, MD, PhD, of the RAND Corporation in Pittsburgh, and co-authors in Annals of Internal Medicine.

“While we know there was a substantial decrease in the amount of opioids prescribed over the last decade, the study really shows us that when we look under the hood, there were some dramatic differences across different populations in how their use of prescription opioids changed,” Stein told MedPage Today.

Brilliant. Meaning is use.

We are doctors with advanced degrees and we are looking at this, coming to understandings and publishing results in respected medical journals. Just as we would have examined the research evidence bearing on safety and effectiveness of opioid medications for all pain, before ever beginning runaway prescription of them.

What could go wrong? When we look under the hood? When American experts and institutions use research to inform healthcare practice to protect the health and well-being of Americans?

This could go wrong – an actual look under the hood, under the cover,

a look at the evidence when certain types of opioids prescribed increasingly by American doctors are not excluded from accounts of effects and outcomes for public health of  “prescribed opioids”.

The DC Office of the Chief Medical Examiner (OCME) investigated a total of 17071 deaths due to the use of opioids from January 1, 2016 through August 31, 2021. This report examines the presence of opioids (heroin, fentanyl, fentanyl analogs, morphine, prescription opioids and the general category of opiates) in deaths observed at the OCME. 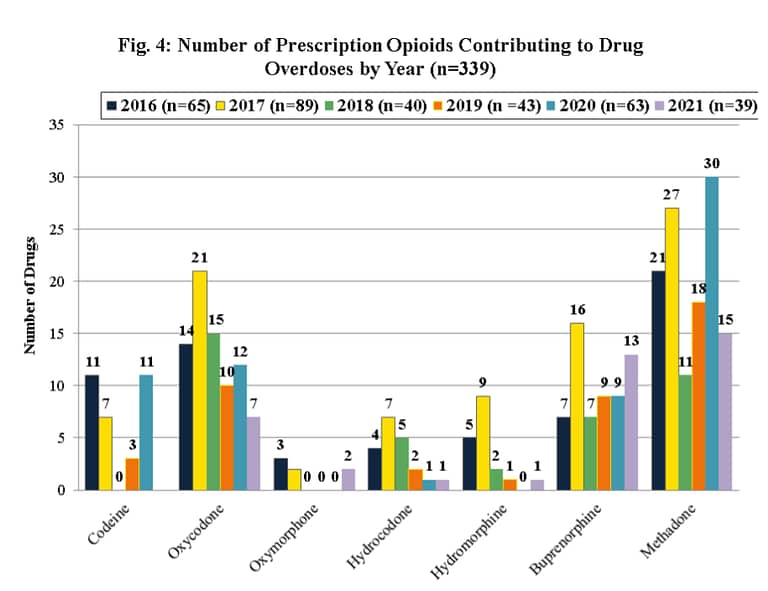 The two primary opioids forming American Medicine’s cure for American Medicine’s opioid crisis – Buprenorphine and Methadone – became comparable to or significantly more involved in lethal overdoses in 2020 and projecting for 2021 will far surpass lethal involvement of all other prescribed opioids recorded in DC. The clear trend is increase over the years 2018 to 2021 (remember that the values for 2021 in Figure 4 are for January through August only) for the two MAT opioids.

These are the predictable results from continued, increasing and less restrictive provision by American Medicine of the prescribed opioids established as fueling America’s increasingly lethal opioid epidemic.

Those results are in the context of the doctor-prescribed opioid buprenorphine increasing in amount dispensed to Americans over past years and decades.

By estimates based on NSDUH survey results, in 2019 2.4 million and in 2020 2.6 million Americans were provided buprenorphine. Those figures are consistent with independent evidence and reports for increases in provision of prescribed bupe over past years and decades, for example here and here. America’s top addiction treatment experts have established that buprenorphine is a “proven treatment approach” and a “lifesaving medicine”.

This Pew report includes data for bupe provision up through last year, 2020, for Philadelphia and “other large urban jurisdictions” (Seattle; Detroit; New York City; Pittsburg; Las Vegas; Palm Beach County; Minneapolis; Baltimore; San Diego; Charlotte; Chicago; Cleveland; Miami; Los Angeles; Phoenix, Washington). By a more direct measure than newly waivered prescribers, buprenorphine prescriptions increased by 11%. That 11 percent increase is an underestimate of buprenorphine dispensed to the extent that policy and practice intent and efforts to increase numbers of doses per prescription were implemented to compensate for concerns about access to bupe related to early pandemic stay-in-place and other restrictions. 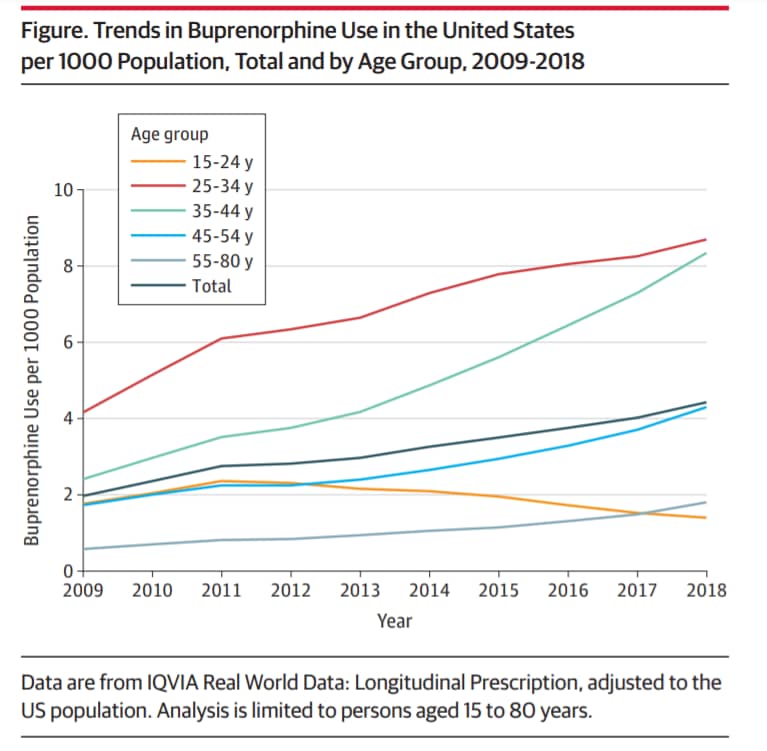 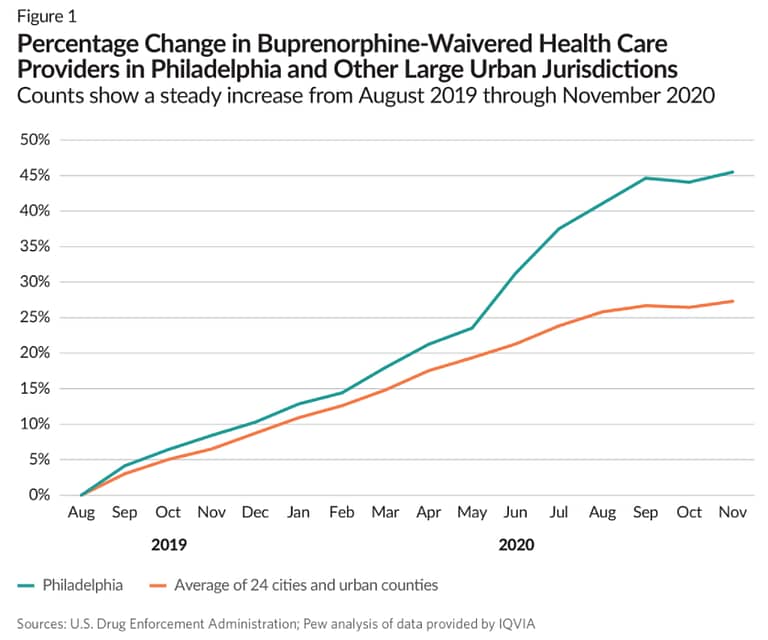 And in Maine, the same pattern, 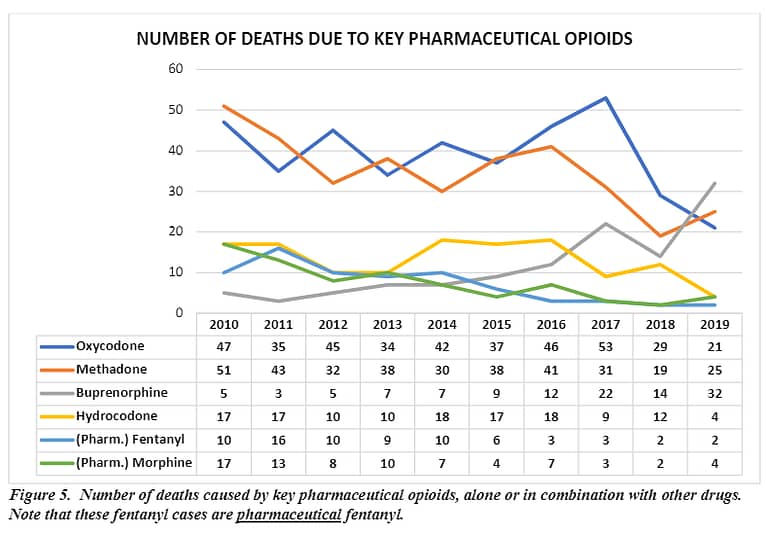 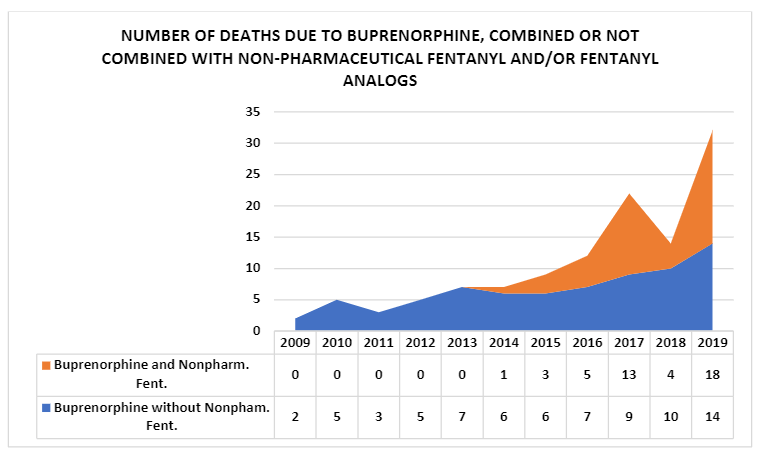 The disingenuous construction of the necessary fabrication of an “opioid paradox” only arises in the collusion of American Media with Medicine and Big Pharma to attempt to hide a lethal confluence of deceptions that cannot be hidden:

– that American Medicine’s increasingly dispensed addictive opioids buprenorphine and methadone are in fact prescribed opioids and as such under the responsibility for public safety or harm of the licensed medical professionals prescribing them, their oversight entities and public health institutions.

– that those opioids are established as routinely diverted, abused, misused and serving as commodity and currency in lethal, “street” economies of illicit opioid abuse.

– that in the context of longstanding, established, consistent evidence against benefit instead for harm-predicting contribution to lethal epidemics, American Medicine in collusion with mainstream media and those healthcare institutions and regulators have significantly relaxed longstanding protective controls to reduce risk of misuse, diversion, and abuse, approving and encouraging increased dispensing without visits, over video connection, by phone call, even initiating prescriptions by phone call, with prescribers acknowledging elevated risk of diversion and abuse.

– that those opioids are evidenced as increasingly involved in misuse with fentanyl and other illicit opioids by objective evidence, and

– that they are increasingly involved in deaths by overdose as evidenced above.

It’s a deception and it’s been working – working to hide, maintain, fuel, and worsen the causes and death toll in American Medicine’s increasingly lethal opioid crisis.