Population-level signs of the vaping-cigarette gateway effect were evident – and ignored- as reported in October of 2018 in a news piece by CNBC. Signs of the same effect in Canada and France soon followed.

New survey reports from Ireland point to the same effect: after decades of declining use of tobacco cigarettes by youth, that trend may be stalled or reversed, as evidence accumulates for a direct link between increasing initiation of nicotine inhalation using vape devices leading to new cigarette smokers.

For the first time in 25 years, rates of smoking among teenage boys in Ireland are increasing, according to a study published in ERJ Open Research.

The study also shows that rates of vaping among teenagers have risen in the last four years and that teenagers who use e-cigarettes are more likely to smoke.

The researchers say their findings indicate that Ireland will not meet its targets to reduce smoking rates and they add to evidence that vaping could be promoting a new generation of young people addicted to nicotine.

in 2017 America’s top medical journal endorsed the FDA’s “innovative plan” to promote use of vaping devices to reduce the public health burden of cigarette smoking.

The rest, as they say, is history, including within months of that endorsement in JAMA emergence of a youth vaping epidemic.

The predictable evidence for, instead of harm reduction, a public health threat from promoting new, socially desirable, appealing ways to generate nicotine dependence began emerging early. Along with the dramatic increase in vaping, part of that evidence – largely ignored – includes shifts, deflections, in epidemiological trends: slowing, “stalled”, and apparent reversal in population levels of cigarette use that had been steadily declining for decades – corresponding to youth and adults taking up nicotine inhalation with the new, popular delivery devices then responding to contingencies and circumstances to shift, once dependent, among products capable of delivering nicotine by inhalation.

The new survey, published in JAMA,

. . . analyzed nationally representative data on youth tobacco use from the National Youth Tobacco Survey (NYTS), a cross-sectional, school-based, self-administered survey of US middle school (grades 6-8) and high school (grades 9-12) students.31 For each survey, a nationally representative sample of US students was selected to participate using a 3-stage cluster sampling procedure. The US Food and Drug Administration collaborates with the CDC to administer the NYTS. Each survey asked 15 000 to 36 000 students about their tobacco-related beliefs, behaviors, and addiction, as well as their exposure to protobacco and antitobacco influences.31 We included all 16 NYTS surveys from 1999 to 2020.

If we were to believe American media, medical, academic and research experts and sources, the survey is good news – establishing that despite increases in use of nicotine by vaping, youth cigarette smoking – arguably a more serious and acute health threat – “has decreased steadily among adolescents in the United States over the past two decades”.

That’s an overt lie, as we will see, and characterizing it as a lie does not begin to capture the pathological levels of incompetence and diminished capacity, and ultimately cowardice, that can possibly explain this type of distortion and reckless disregard for the potentially lethal consequences of the misinformation for public health – if we were to believe it. The way trusting, vulnerable Americans – with chronic pain, trapped in American Medicine’s opioid epidemic, trapped in depression or epidemics of compulsive substance use – have believed America’s top medical, public health, research, academic and corporate media experts and institutions about . . . just about everything health related: opioids for chronic pain; addictive, diverted and abused opioids prescribed as a “fix” by American Medicine for American Medicine’s opioid crisis; vaping as harm reduction and for smoking cessation; medical cures for addiction; addiction as a chronic medical condition; “peers” as valuable in the treatment of substance use problems; chronic pain as a medical condition.

How’s all that working out?

But let’s be open minded, let’s take a look. The large survey, published in America’s top medical journal, the Journal of the American Medical Association (JAMA), was publicized by the University of Alabama in the UAB News, with this lead sentence:

“Cigarette smoking has decreased steadily among adolescents in the United States over the past two decades.”

Here are the relevant line graphs from the study, portraying youth use of “combustible” tobacco products (essentially cigarettes), along with use of electronic cigarettes (“e-cigarettes”, “vape”) to deliver nicotine – 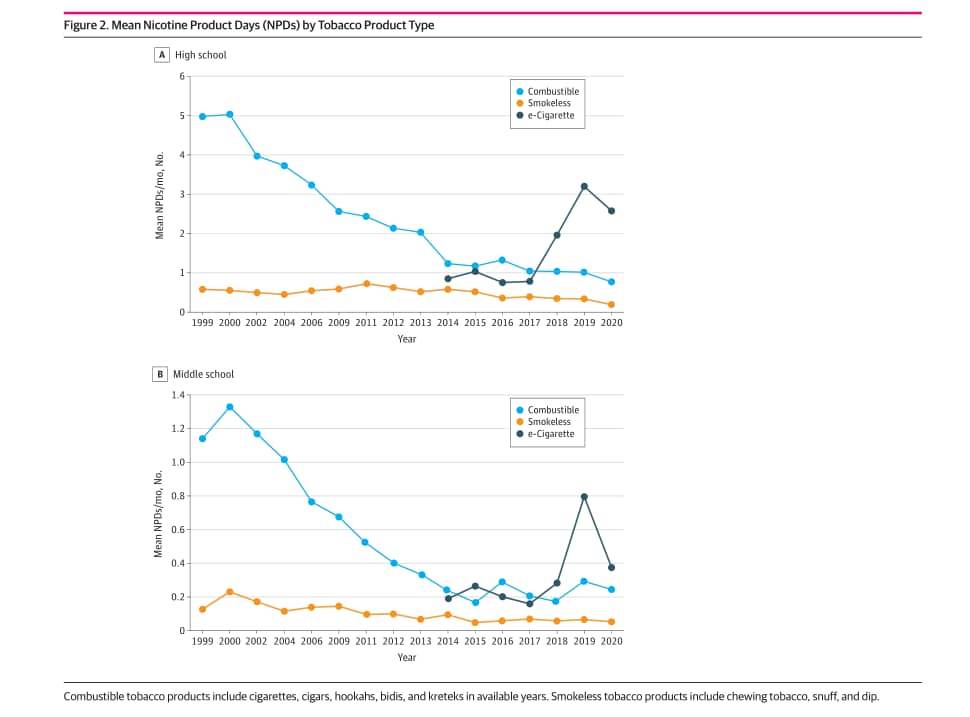 There is no need to address or understand the complexities of experimental design or statistical analysis to see what has happened over the past decades based on this survey with large sample size. All that is required are the understanding of what is represented by a line graph, the ability to note associations, to think critically about related evidence, and the lack of cowardice that otherwise prevents expressing what is obvious.

Cigarette use is represented by the blue line, vaping by the black line

Vaping among youth emerged in 2013 to 2014 and increased rapidly

To the extent that those claims are true, it would necessarily be predicted that as vaping increased dramatically among youth beginning 2013 to 2014, the decades-long, established historical trend of decreasing cigarette use would begin to decrease even more – at an increased rate, with a steeper downward slope – or at least not level out, or “stall”

“Stalling” is exactly, clearly what the consistent historical trend in decreasing cigarette smoking did, exactly as vaping began to increase.

For high school students, the historical trend of consistent annual reductions in prevalence of cigarette use stalled, flattened, remaining flat over the period of most pronounced increase in vaping, 2017 to 2019, then decreasing from 2019 to 2020 when vaping decreased

For middle school students, there are signs of the historical, decades-long decrease reversing – all values for frequency of cigarette use by that age group for the years 2016 through 2020 are greater than the lowest historical value, in 2015 at the beginning of the surge in vape use

That apparent population, or epidemiological, gateway effect was predictable based on available evidence and considerations of psychological, behavioral, and social influences on youth choices and potential use of nicotine by various delivery methods

Consistent signs and evidence point to another medical model public health intervention – vaping nicotine as harm reduction – accumulating predictable harms that will be associated with the derailing of decades of progress on cigarette smoking for both youth and adults along with additional effects of increased population prevalence of compulsive nicotine use, including prediction of contribution to increased incidence of diabetes.

Harms predictable when the nation’s leading medical journal endorsed an “innovative plan” 4 years ago to moderate the still devastating national toll due to cigarette smoking, by administration of nicotine by vaping. That influential endorsement and message to medical providers encountering and advising smokers in medical visits, along with American Medicine’s mass-messaged lies about the research bearing on e-cigarettes as smoking cessation aides, almost certainly has been enabling and encouraging to Americans taking up vaping of nicotine, just as enabling and encouraging as the advice and prescriptions Americans were provided by their doctors (clinically educated over dinners provided by generous pill salesmen) for opioid pain medications for the non-medical condition of chronic pain.