New reports reinforce evidence of a triumphant success for America’s Medical-Media alliance – to mutually protect status, freedom from accountability, and control required to create what is “known” about health care in America, manufacturing continued privilege for knowledge- and fact-making.

That success empowers licensed medical professionals to continue to recklessly distribute opioids against recommendations and indications, with corporate media usefully creating distractions to divert public attention away from the malfeasant medical overprescribing: 1) the exposed and debunked deception that increasing presence of fentanyl in street economies of illicit drug use is responsible for worsening the epidemic that medical approaches would otherwise be containing and ending and 2) the transparently absurd but useful fiction that somehow pharmaceutical companies or the families owning them have been responsible for the runaway over-prescription of opioids.

“A retrospective claims-based cohort analysis of more than 300,000 opioid-naïve patients before ophthalmic surgery between 2012 and 2017 found that exposure to opioids after their surgery was linked to new, persistent use long term.

The analysis, published in Ophthalmology, suggests that patients who had never used opioids before surgery are at higher risk of addiction post-surgery, making exposure to opioids an independent risk factor for persistent use in this group of patients. Persistent use is defined as filling a prescription 90 days after surgery, and then again in the 91-180-day post-operation period.” 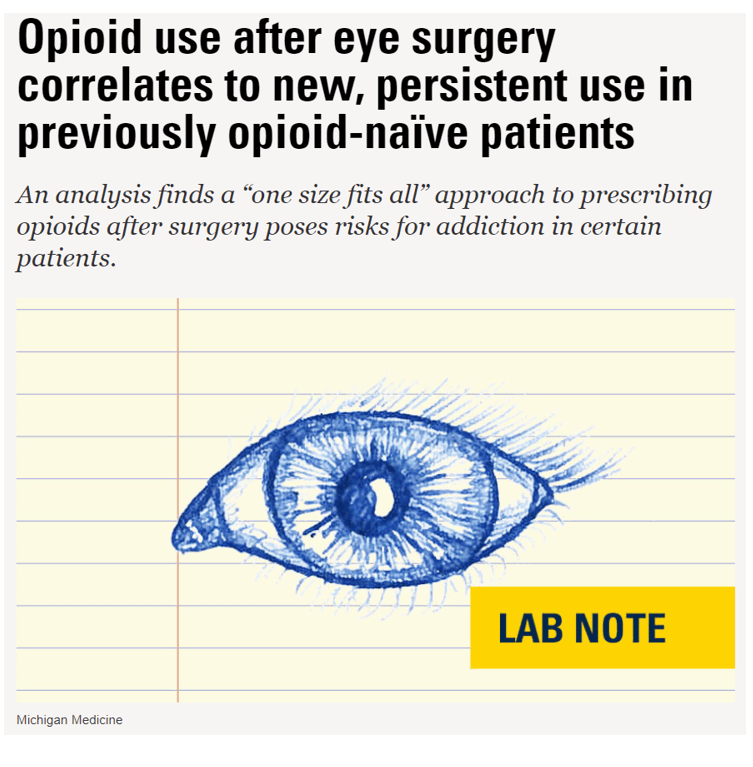 The report ends with a remarkable acknowledgement.

“Clinicians that are prescribing opioids should consider if they’ve given adequate warning about the dangers of the medication to the patient, taking into consideration their individual pain threshold and history of opioid use,” said Woodward. “Are there other pain management options that are better suited for the patient to match the level of pain with the prescribed medication?”

Next steps for Woodward’s research team includes studying the barriers that providers face at their institutions to creating best practices for prescribing opioids and tailoring pain prescriptions, so the national opioid crisis can start to be combatted at the foundational level.

That is, decades and hundreds of thousands of opioid-related deaths into a lethal epidemic, and with continuing evidence of recklessly prescribed opioids, the action taken by the medical industry for self-regulation is that medical over-prescribers should consider whether patients should be informed about the potential dangers of opioid use.

And!  There will be next steps, more studies to identify barriers that prevent the doctors from using their clinical judgment and obligation to protect the health and safety of patients by avoiding excess prescription of opioids? Bold action.

Apparently there has been little motivation or impetus to consider the practice changes needed to protect patients from the known risks including opioid dependence and lethal overdose.

That may be related to the remarkably effective efforts of corporate media to ensure that “Everyone Knows It Now”, knows that the Sackler family, not licensed medical professionals, are responsible for Americans ending up with addictive opioids they don’t need and that carry risk of death for them or whomever the pills end up with.

The Sacklers did it. And fentanyl.

It gets more interesting.

New evidence points to medical professionals neglecting – in identification of patient risk factors, prescribing, and follow up on prescriptions – to provide patients at high risk for opioid overdose with the death-reversing drug naloxone (Narcan). Narcan distribution by community and public health-based programs has increased markedly, but not by the doctors prescribing high-risk opioids.

“Only a tiny minority of people at risk for an opioid overdose actually are prescribed a drug that could save their lives, a new study suggests. And the odds of having a dose of the rescue drug were very low among some of the most at-risk groups, including those who had already survived a previous opioid overdose.

In all, less than 2% of people who had at least one of the main risk factors for opioid overdose had filled a prescription for the life-saving drug naloxone by the last 6 months of the study period. Naloxone prescribing may be missing a large proportion of those at highest risk, the authors say.” 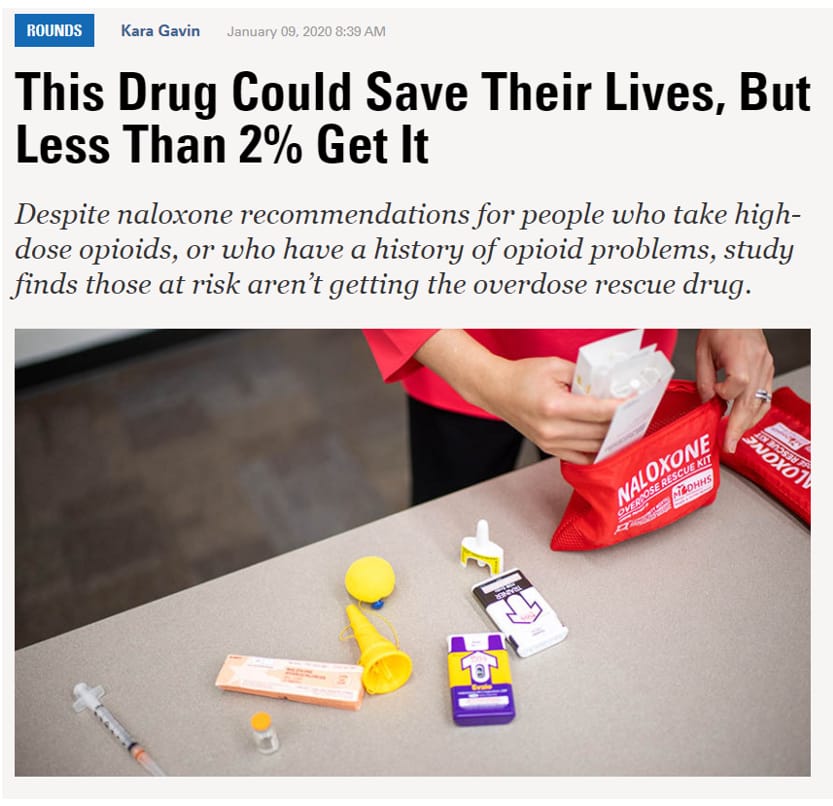 It is naloxone – it’s rapidly increasing use preventing opioid overdoses from becoming deaths – that accounts for any and all moderation in opioid OD deaths over past years; belying any claimed effectiveness of medical model opioid substitution treatment (OST, or MAT); and perversely the saves are one indicator of a worsening crisis as the medical “fix” is increasingly provided – each save by naloxone represents another incidence of high-risk opioid use leading to overdose, high risk use continuously promised to be averted by the medical cure.

From the original research –

In April 2018, the Surgeon General issued the “Advisory on Naloxone and Opioid Overdose,” which encourages healthcare providers to identify patients with risk factors for opioid overdose and prescribe naloxone to those patients to prevent overdose.7,8 Naloxone prescribing was also emphasized in the 2016 CDC Guideline for Prescribing Opioids for Chronic Pain, which specifically recommends “considering offering naloxone when factors that increase risk for opioid overdose, such as history of overdose, history of substance use disorder, higher opioid dosages (≥ 50 MME/day), or concurrent benzodiazepine use are present.”9 These are key risk factors identified through prior studies of overdose.10,11,12,13,14

However, the degree to which naloxone has been prescribed in recent years, and whether naloxone is being prescribed to patients at increased risk for overdose, remains poorly understood. Prior studies of naloxone have focused on distribution of naloxone within community-based programs,15,16 populations often covered under Medicaid or are uninsured. However, there has been much less work examining naloxone in the commercially insured population or in general medical settings, which may be critical to reach a broader population at risk for overdose.

Is American Medicine doubling down on its lethal epidemic? Or tripling down?

But that’s not all, there’s something missing, hidden

by mass media colluding with medical institutions, medical prescribers, and useful idiots constructed as “healthcare experts” or “addiction treatment experts” to distract the public with an opioid shell game – in which oxycontin and hydrocodone, for example, are “prescribed opioids” while methadone, suboxone, and subutex are NOT prescribed opioids – creating the necessary lie that prescription opioids are NOT THE PROBLEM, because the real problems are the evil Sackler family and fentanyl. Because buprenorphine and methadone are NOT prescribed opioids.

Because if they were acknowledged as, identified with “prescribed opioids”, then OH SHIT do we have a problem. Because – and unfortunately the evidence is longstanding, extensive, and consistent – as routinely diverted, abused, addictive opioids, potentially lethal alone or as increasingly used in combination benzos and other drugs, they are serving as commodity and currency on the street in illicit, lethal opioid economies. Economies in which medical prescribers are handing out the currency.

But remember, the opioids routinely diverted, abused, traded for illicit opioids on the street, increasingly present in opioid overdoses, and despite not being regularly even reported in overdose reports, are not of concern to you. That’s why we don’t report on them. Move along, there’s nothing to see here. Don’t think for a minute that those opioids are methadone, Suboxone, and Subutex. Prescribed by doctors and other medical professionals in increasing amounts. Now prescribed without need for evaluation or in-person contact. By video connection. Against all relevant evidence that they are fueling an increasingly lethal opioid crisis. Opioids prescribed just as in the creation of the opioid crisis.

It is not your place to question that.

It was the Sacklers.

Tripling down, it seems, with very high stakes. They act as if they cannot lose, as if they are protected.