America’s increasingly lethal opioid crisis has been generating deaths, social costs and headlines for going on two decades, with identification of rampant, reckless, and medically contraindicated prescription of opioids for chronic pain as a key driver of diversion and misuse. Yet continuing, accumulating reports point to little change in the behaviors of the sources of those opioids for Americans who become dependent and harmed – medical prescribers.

See the related post “AMERICAN MEDICINE DOUBLES DOWN ON ITS OPIOID CRISIS” for additional reports on continued misprescribing and successful corporate media creation of the distracting scapegoat and necessary lie that the pharmaceutical industry got those opioids into the hands and homes of patients. Not a single opioid pill was provided a living or dead American by anyone other than a licensed medical professional (LMP) meeting with patients in exam rooms and writing prescriptions for the addictive, controlled substances that were never evidenced as helpful for chronic pain.  And these posts to examine and dismantle the necessary distraction and transparent fabrication that it is an unpredictable presence of fentanyl in street economies of illicit opioid use  that explains the decades-long trend of persistently mounting opioid deaths as more and more of the substitute opioid (buprenorphine and methadone) medical cure – the “gold standard”, “fix” –  is provided.

Public data, including new government studies and reports in medical literature, shows enough prescriptions are being written each year for half of all Americans to have one.

Patients still receive more than twice the volume of opioids considered normal before the prescribing boom began in the late 1990s.

“We’re 5% of the world’s population, but we consume 80% of the world’s prescription opioids,” said Dr. Jonathan Chen, a physician and researcher at Stanford University Medical Center who studies prescribing patterns.

Critics say the practice exposes tens of millions of patients each year to unnecessary risk of addiction, overdose and death. It also floods communities with vast quantities of opioid medications that go unused, building up a deadly reservoir of drugs in home medicine cabinets that often wind up being abused.

“It’s not just a handful of doctors doing it. We kind of all are. It’s become part of our culture that this is normal,” Chen said.

In 2016, the CDC issued strongly-worded guidelines, urging doctors to avoid opioids or to minimize their use whenever possible. Roughly half the states have implemented some form of regulation designed to curtail prescribing.

Mikosz points to the way many doctors treat fibromyalgia, a condition that can cause severe and chronic pain. Most experts now agree opioids aren’t the safest or most effective treatment, but physicians continue to prescribe opioid pain pills aggressively anyway.

“Patients with fibromyalgia were typically prescribed at least a full month supply of opioids,” Mikosz said.

Remarkably, studies of prescribing practices reviewed by NPR show that physicians continue to regularly prescribe opioids even for relatively mild pain conditions, including lower back pain, muscle strain and headaches.

This is happening despite research that shows even a single prescription for opioid medications comes with significant risk. A study published this year in Massachusetts found that between 1% and 4% of patients who are introduced to opioids develop opioid-use disorder.

Multiply that risk times tens of millions of patients, and you have the makings of another wave of opioid addiction.

Additional evidence of uncontrolled overprescribing of opioids by LMPs comes from a study (behind a paywall) in The Lancet, reviewed here and describing trends through 2017 or later, following years of regulatory efforts to curtail inappropriate, harm-predicting opioid prescribing by medical professionals.

The authors have called for interventions including specialist pain clinics, drug monitoring policies, improved medical training in opioid prescribing, and new pain management methods including the use of alternative pain relief medication to curb the crisis.

“Most people are aware of the opioid epidemic in the States, where there’s been a huge increase in strong opioids prescribed for the management of chronic pain,” said Professor Colvin, Chair of Pain Medicine at the University’s School of Medicine.

Opioids are now one of the most commonly prescribed medications in the US with similar, although less marked, trends in other high-income countries, including the UK. Comparatively, many low-income countries worldwide have little access to opioids and cannot provide appropriate pain relief.

There are also marked international differences in opioid prescribing after surgery. Data comparing one US and one Dutch hospital found that 77% of patients undergoing hip fracture repair in the US hospital received opioids, whereas none did in the Netherlands hospital, and 82% of US patients received opioids after ankle fracture repair compared with 6% of Dutch patients. Despite these differences, patients in each of these countries show similar levels of satisfaction with pain management.

In addition, excessive amounts of opioids are prescribed to US patients after surgery. Studies between 2011-2017 found that 67-92% of US surgery patients reported not using all of their opioid tablets, typically leaving 42-71% of their prescribed pills unused.

A more recent study describes ongoing misprescribing of opioids and their misuse by 10 million Americans in 2019, a phenomenon and public health threat not replicated in any other country  – 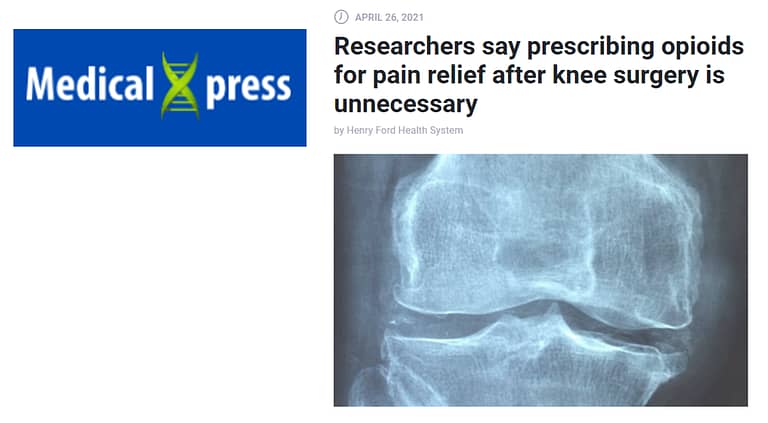 “Orthopedic surgeons can now perform meniscal knee surgery without the need for prescribing opioids whatsoever,” said Toufic Jildeh, M.D., chief resident at Henry Ford’s Department of Orthopaedic Surgery and the study’s lead researcher. “We believe this non-opioid approach can be replicated for other types of orthopedic surgeries.”

In what has been labeled as a serious national crisis by the U.S. Department of Health, nearly 10 million Americans misused prescription pain relievers in 2019 and more than 50 thousand people died as a result of opioid-related overdoses. Dr. Jildeh points to the study’s findings as an important first step in the effort to reduce and eliminate the use of addictive opioids to manage pain following other types of surgeries as well.

In this report and data for opioid overdose death trends in Maryland, consistent with continuing misprescription of opioids, deaths attributed to prescribed opioids rose in 2020 following 3 consecutive years of decrease over 2016 to 2019.

The number of unintentional intoxication overdoses — those involving all drugs and alcohol — rose 18.7% to 2,773 in 2020 from 2,379 in 2019, according to data collected by the Maryland Department of Health.

In more than 90% of cases, opioids were detected in bodies postmortem, the highest rate recorded in the state’s history of collecting this data. 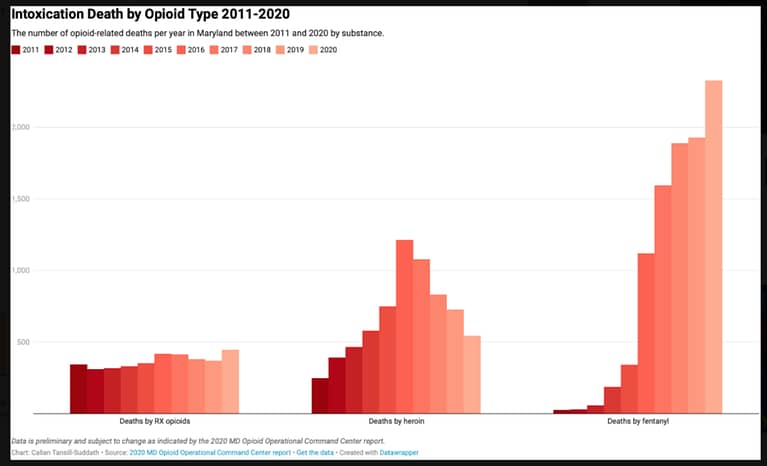 The increasingly lethal opioid crisis – as well as epidemics of depression, youth substance use, suicide, other problem substance use including compulsive use of food generating an obesity epidemic – are largely to primarily driven by hidden, normalized pathologies. Not those of the Americans trapped in the generated epidemics, but pathologies of American economic, social, and institutional systems including a Medical-Corporate Media alliance: pathological levels of incompetence, intellectual cowardice, of diminished or underdeveloped capacity for integrity, for research literacy, for ethical behavior, for critical thought.

We should not expect change from within those systems, or without taking power away from them.