As everywhere in a sickened America,

St. Louis ranks among the most deadly cities in the country for overdose deaths among African Americans, and to Johnson, the Black community seems caught between organized crime’s fentanyl push and ineffective efforts to stop it.

One of the most effective weapons in the fight against opioids is medication assisted treatment, where a patient takes a drug such as buprenorphine every day to prevent cravings. The method has been shown to reduce both withdrawal symptoms and overdoses, and keep people engaged in treatment for longer.

But in Missouri, it’s difficult for people to access that help.

Rachel Winograd of the Missouri Institute of Mental Health says that’s because many treatment programs require patients to do extensive screenings, commit to therapy or lose treatment if they relapse.

“One of the most effective weapons in the fight against opioids is medication assisted treatment . . .”

In fact, exactly as in the Medical/Media collusion fabrication of lies about use of opioids to treat all pain and that created the opioid crisis, there is not and has never been compelling evidence to support effectiveness of MAT.

“ . . . where a patient takes a drug such as buprenorphine every day to prevent cravings.”

Cravings are not a significant cause of return to problem substance use for any user attempting or considering an attempt to stop use. Instead, the evidence on relapse clearly identifies other factors as important in return to problem substance use. The cravings fabrication has been necessary to support provision of addictive opioids in MAT, just as fabrications were necessary to support use of opioids for non-medical pain that generated and perpetuates the opioid crisis.

“The method has been shown to reduce both withdrawal symptoms and overdoses, and keep people engaged in treatment for longer.”

It has not been shown to, instead all lines of relevant evidence point to MAT opioids fueling the increasingly lethal epidemic.

“But in Missouri, it’s difficult for people to access that help.

Rachel Winograd of the Missouri Institute of Mental Health says that’s because many treatment programs require patients to do extensive screenings, commit to therapy or lose treatment if they relapse.”

Access to bupe and methadone has increased over the past year or more, become much easier to get, these proven medical cures for problem opioid use. Winograd makes the point in the piece –

“Utilization of buprenorphine and methadone — the two most efficacious medications for treating opioid use disorder — has broadly increased over the last four years,” Winograd said. “And that has been a net benefit to people who are enrolled in treatment services.”

“. . . because many treatment programs require patients to do extensive screenings, commit to therapy or lose treatment if they relapse.”

A patient who is not motivated to spend two or three hours on an intake and screenings to get the medical cure that will free him from the daily risk of death by fentanyl is not in your program or clinic to get treatment. He is there to get free buprenorphine, “subs”, paid for by the state Medicaid program and that will be used on the street as currency for fentanyl (discussed below). That’s why his presentation is a bit pressured and irritable. No, I’m not gonna do your fracking intake, I need those medications so I don’t fking relapse! Right? And he has no use for counseling, just the fking meds to help me! After all, you’ve convinced those users that none of that is necessary for treatment of their opioid use problem, only the MAT medications that are the proven cure for that disease of the brain. Remember? You stuck to that script, trained users how to get the addictive, diverted opioids from you.

But the opioid user doesn’t really need to worry about that – because “treatment” is universally available, every day, on the street, and at very low cost, nearly free – the cost of the single dose of Suboxone (buprenorphine) that is more common on the street than in pharmacies. It’s true. And that’s not contested, there’s no denying it, earning bupe the position of most misused prescribed substance – 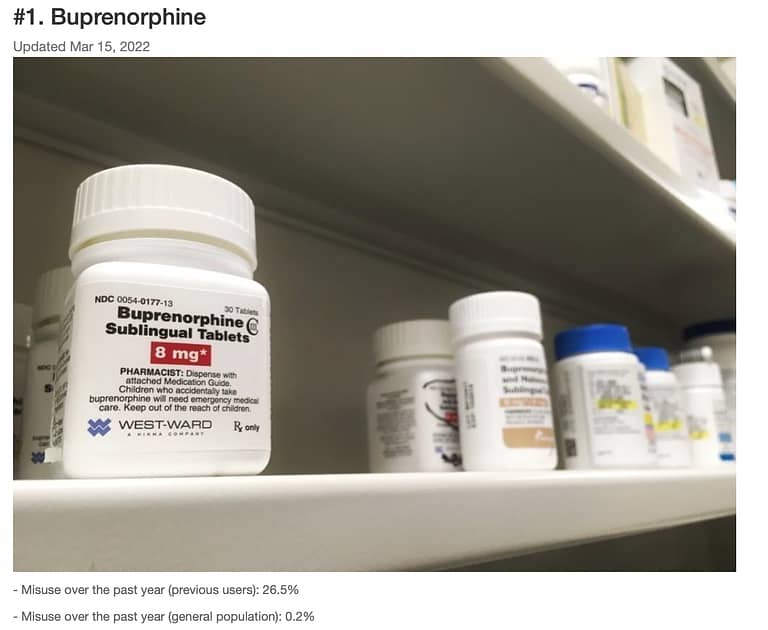 The Substance Abuse and Mental Health Services Administration, or SAMHSA, reported that among the people who misused prescription pain relievers in 2020, nearly 65% stated that their primary reason for doing so was to relieve physical pain. The percentage of people reporting drug misuse as a reason to get high was 11.3%.

Misuse is defined as patients taking prescription medications in a way other than what has been recommended by their doctor. It might look like taking someone else’s prescription or taking one’s own at larger or more frequent doses, or for a longer period of time.

Citing data from SAMHSA, Zinnia Health identified the most commonly misused prescription drugs in the United States, all of which are opioid analgesics, or opioid pain relievers. This class of drugs acts on the central nervous system by blocking pain signals to the brain. In addition to pain relief, these drugs also intensely trigger the brain’s reward centers, releasing endorphins and creating positive feelings commonly referred to as euphoria. This is what makes prescription opioids—and all opioids, for that matter—so dangerously addictive.

That’s not half the story

Turns out – who could have guessed? – bupe (available only as initially prescribed by medical professionals) functions, has for decades, as commodity, consumable (providing a very satisfying euphoric and sedative effect when taken with a benzodiazepine, prescribed or diverted), and currency in lethal street economies of illicit opioid use. Everybody knows it, as documented here, here, here, and here (scroll down to “The bupe economy”). Everybody knows it, but unfortunately, lethally, America’s trusted medical experts and trusted media sources find themselves compelled to lie about it, to attempt to hide it. It wouldn’t fit the narrative, would it?

Currency? Right, often as payment for fentanyl, follow the links above. Free bupe from your MAT program, desired because it’s pharmaceutical, safe, a known dose, – traded for heroin or for fentanyl, for “real dope”, known for years. That’s why hard evidence links users in MAT programs to urine screens positive for fentanyl and to pandemic OD deaths.

So, yes, “treatment” as defined by America’s experts

is universally available, every day, on the street, and at very low cost, nearly free – the daily cost of a single dose of Suboxone (buprenorphine).

And that DIY proven medical cure can be integrated, supplemented with America’s proven adjunct treatment for any substance use problem – at no cost and available in every city in the U.S.  Daily or twice daily sessions (comprising the highest level of outpatient treatment for substance use disorder as defined by the American Society of Addiction Medicine, ASAM)  of what, by consensus is effective treatment for addictions – attendance at meetings of the religious subcultures AA or NA.

Overwhelming consensus. We know with certainty that AA and NA are effective forms of treatment because America’s trusted Media and expert public health Authorities have affirmed that repeatedly over pandemic periods by noting that more difficult access to those meetings has been a factor in continuously mounting opioid deaths. How can we doubt that?

Okay, sure, so it has been established for decades that the bizarre, countertherapeutic prescriptions and practices of those religious subcultures actually predict harm, predict return to problem substance use at failure rates of 85 to 95 percent. But that’s not part of the narrative, is it? American Media is sticking to the script. Mustn’t we?

And the deaths mount.

“What we’re done in the past historically have not worked — and specifically for the Black community — it has not worked,” Cunningham said. “Because if it did work, and it was working, why are Black overdose deaths increasing so significantly among the Black population?”

She had already answered –

“Utilization of buprenorphine and methadone — the two most efficacious medications for treating opioid use disorder — has broadly increased over the last four years,” Winograd said. “And that has been a net benefit to people who are enrolled in treatment services.”

As elsewhere, expansion over past years, intensified over pandemic years, of access to free addictive, diverted MAT opioids serving as currency on the streets for less pure, more potent, less safe opioids. MAT clinics handing out the currency for fentanyl, increasingly without need for clinical contact, without requirement for urine drug screens, for any safeguards, as easy as a phone call, a “telemedicine” hook-up.

an inscrutable mystery, incomprehensible, not to be thought about, never questioned. Just taken on authority, with the explanations of trusted experts.

It would be frightening to question.