Opioid-related and other drug overdose deaths increasing steadily, now sharply, over decades, 70,000 in 2017. Seemingly perversely, as population “dose” of the promised, publicly funded U.S. medical industry cure for the medical model “brain disease” of compulsive substance use – dose of substitute opioids that are addictive, diverted and abused – has expanded over the same years.

And we know that illicit street fentanyl does not explain away the increases in opioid-related OD deaths due to failure of the medical fix.

In Ohio, new evidence – indicators of high-risk opioid abuse continue to increase over years of heavily increased funding and provision of substitute opioid medical fixes (OST) for the medically-generated opioid crisis, results inconsistent with presumed and unsupported benefit from OST. 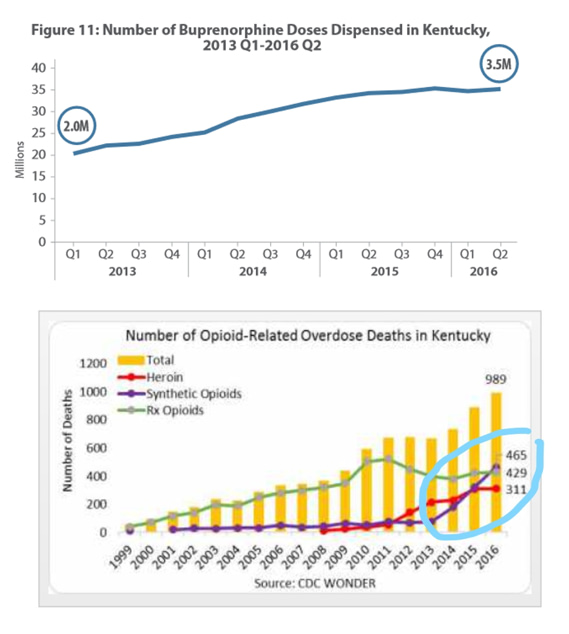 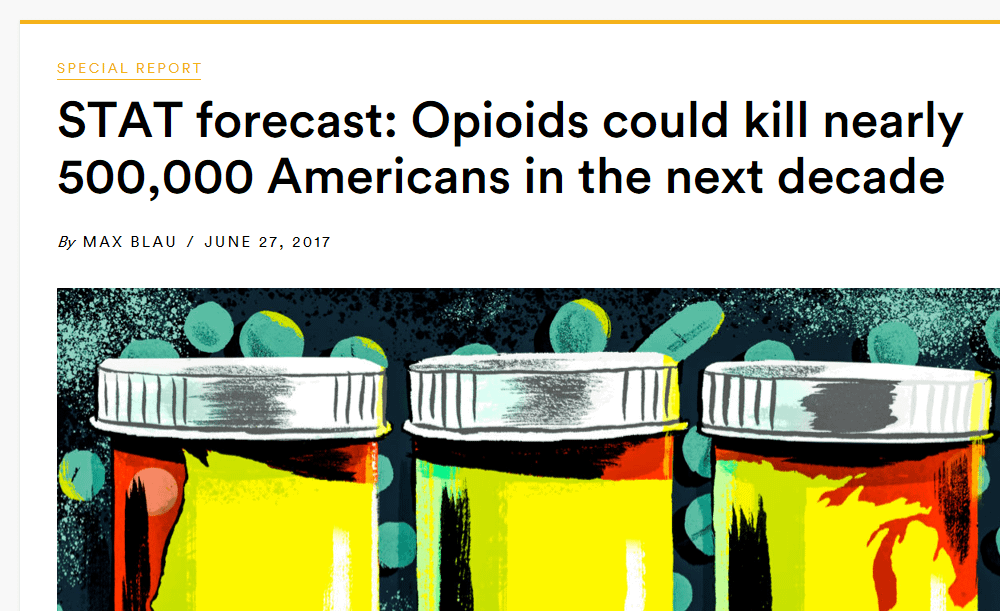 In Ohio, new evidence mined by reporter Katy Kinner for WSWS – opioid-related overdose (OD) deaths have increased steadily up through early this year, over years of heavily increased funding and provision of substitute opioid medical fixes (OST) for the medically-generated opioid crisis, results inconsistent with presumed and unsupported benefit from OST.

Discussed in a preceding post, one of multiple lines of evidence consistently invalidating benefit from OST: high risk opioid use increasing in Canada associated with increasing doses of the OST medical fix –

Over the same time period what should be a valid indicator and measure of changes in prevalence of high-risk opioid use – incidence of injection-related endocarditis – has increased steadily and significantly as well. That’s the opposite of predicted if OST by provision of methadone and bupe were providing benefit by reducing high-risk opioid use. 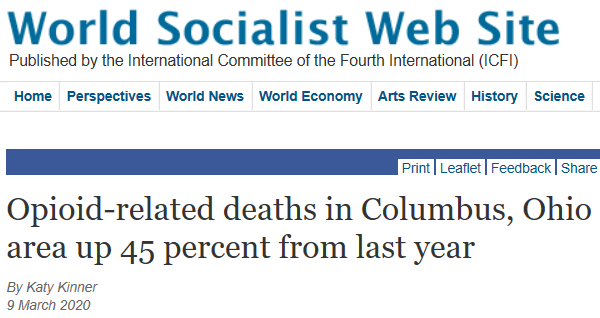 From the report by WSWS reporter Katy Kinner –

Franklin County, Ohio coroner, Dr. Anahi Ortiz, revealed in a press conference at the end of February that the state’s capitol Columbus and its immediate suburbs had seen the overdose death rate increase by 45 percent from last year.
Comparing the time period of January 1 to February 21, Franklin County saw an increase from 73 overdose deaths in 2019 to 109 overdose deaths in 2020. Dr. Ortiz also described an increase in suicide and homicide deaths, each manner of death increasing by 40 percent from 2019 in the same time period.
On Facebook, Dr. Ortiz also posted a statement describing last month’s rise in deaths: “This has been a very sad week for Franklin County: we have had 23 overdose deaths from 1/31 to this past Friday. Then yesterday, February 8 we had five overdose deaths. Most of these folks most likely died from fentanyl.”

Overdoses can be a result of a multitude or combination of drugs including but not limited to opioids, stimulants such as cocaine and methamphetamines, and depressants such as benzodiazepines. However, as Dr. Ortiz made clear in her press conference, fentanyl has been a main contributor to the overdose increases in Franklin County as well as on a national scale.
Data from the Ohio Department of Heath shows that 73 percent of the 3,764 unintentional drug overdoses in the state of Ohio in 2017 were attributed to fentanyl, frequently in combination with other drugs such as heroin. Thirty-eight percent of overdoses were attributable to fentanyl in 2015, and 53 percent in 2016. Since 2012, Ohio deaths from synthetic opioids have increased 25-fold, jumping from 139 deaths in 2012 to 3,523 deaths in 2017. Compared to the 2017 national synthetic opioid death rate of 28,869, the state of Ohio accounts for 10 percent of the national whole while its population represents only 4 percent.

Yet over the past decade, spending in Ohio for medications dispensed to patients with problem opioid use has increased substantially, more than in many states. 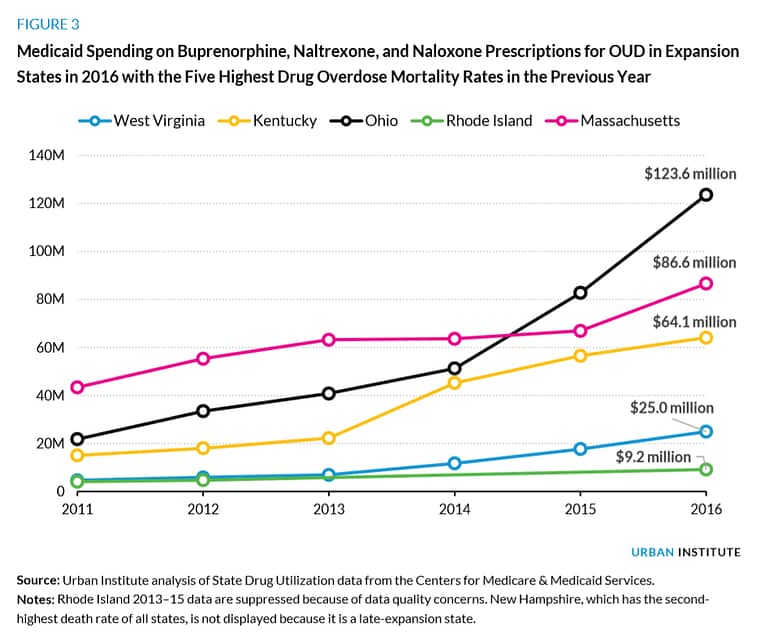 Particularly, spending for buprenorphine-based opioid substitution has increased, for example a doubling in Medicaid payment for Suboxone from 2014 to 2016. 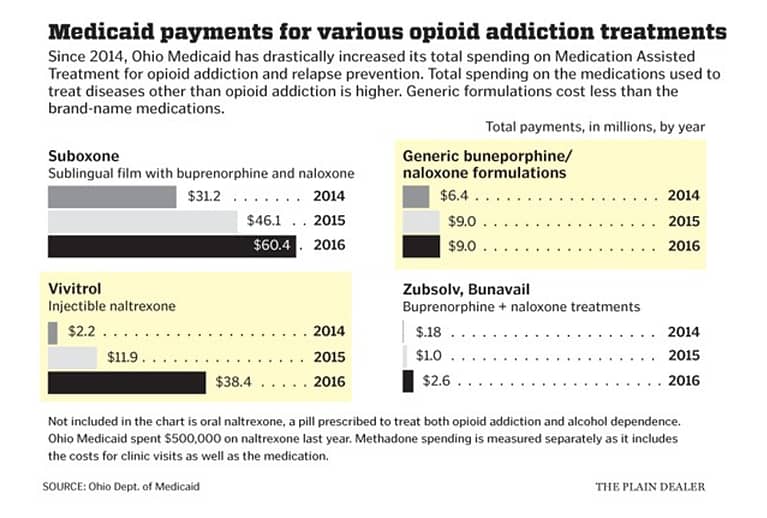 Despite that use of public healthcare resources for medical fixes for the medically-generated lethal opioid crisis, opioid-related overdose deaths have “spiraled”, increasing to record levels over the same years.

Despite increased state spending, legislation and debate on Ohio’s drug crisis, last year’s [2016] death toll was 33-percent higher, according to the annual report on unintentional drug overdose deaths released Wednesday by the Ohio Department of Health.

The accumulating data from Ohio, like those from Ontario, Canada, provide a more direct measure and evaluation of the effects on high-risk opioid use of increasing provision of the publicly-funded medical “fix” for the medial opioid crisis.

Significant, extended increases in medical provision of buprenorphine and methadone OST should necessarily have resulted in the opposite outcome – decreases over the same time period of high-risk opioid use. Unless, as is generally and predictably the case, the provision of a medical model “treatment”, unsupported and indicated against by research evidence for an entirely non-medical condition – compulsive problem opioid use – has predictably resulted in a worsening of an iatrogenic lethal opioid crisis rather than providing benefit.