AS VAPING INCREASES, CIGARETTE USE REBOUNDING, NOT DOWN, IN BOTH U.S. AND CANADA

Evidence continues to accumulate pointing to increased prevalence of “vaping”, or use of e-cigarettes to inhale vaporized nicotine (the addictive chemical in cigarettes), in adults and youth as providing no established net population health benefit and likely harm. As noted in a previous post in a series here at A Critical Discourse – as with other “harm reduction”, replacement, and healthcare practices driven and implemented by the medical industry in collaboration with drug manufacturing and delivery industries, medical/pharmaceutical fixes for entirely non-medical problems have resulted in predictable failed outcomes and harms. Just last year, the FDA branded vaping as an important “harm reduction” strategy, that approach endorsed in the nation’s leading medical journal. 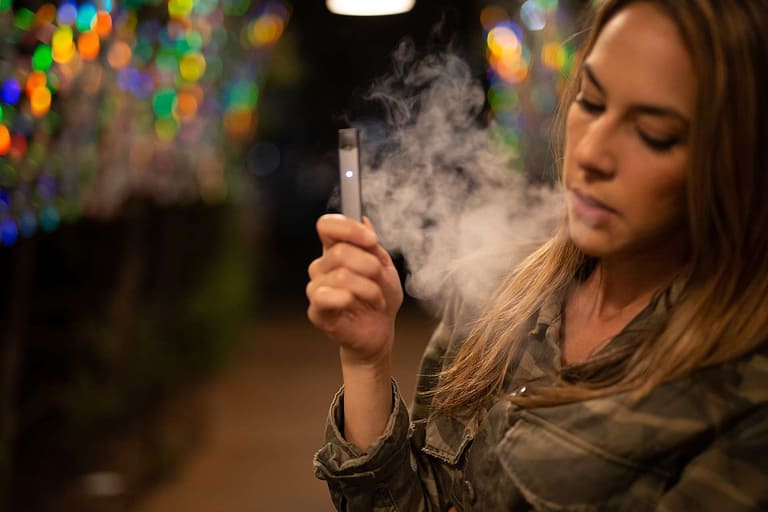 Use of e-cigarettes appears to predict initiation of tobacco smoking in both youth and adults. See additional evidence discussed in context in this post.

Now, preliminary corroborating epidemiological evidence congruent with those results points to prevalence of cigarette use – after years of decline – increasing, not decreasing, concurrently with increases in prevalence of nicotine delivered in vape devices. The uptick in cigarette use is indicated by a trend of clearly diminished reduction in prevalence with a statistically insignificant increase in cigarette smoking in youth in the U.S., discussed and graphically reproduced in this post. Following those findings, Health Canada released data that, similarly, is both predicted and alarming.

New Canadian public health figures – for e-cigarette and cigarette use among Canadians 15 years of age and older – appear to model those alarming U.S. trends. Prevalence of that population in Canada having ever used e-cigarettes increased by 15% in 2017 compared to 2015. And concurrently with the increased use of vaping, instead of the desired and industry-promoted projection of decreased cigarette use related to vaping, cigarette use increased, also by 15%, over the same period. As in the U.S., cigarette use had apparently prior to the upturn been in decline, “In 2017, the overall prevalence of smoking among Canadians aged 15 and up was 15 per cent, representing 4.6 million current smokers, an increase from 2015 when it hit an all-time low of 13 per cent.”

Endorsement of the FDA plan in the Journal of the American Medical Association (JAMA) cited a small downward shift in vaping by youth over just one year- 2016. But as described in new reports in the online news source Vox, more recent data point to booming use of e-cigarettes among youth, that use increasing likelihood of young people starting to smoke (tobacco) cigarettes.

Additional takeaways from the 2018 report on e-cigarette use by the National Academies of Sciences, Engineering, and Medicine include:

Discussed here, multiple, accumulating lines of research and evidence point to failed outcomes for vaping, branded and promoted as another form of medical industry “harm reduction”.

To summarize and connect some links among accumulating research and findings:

Vaping is booming among young people

Driven by popularity of shrewdly advertised, designed, and marketed devices to deliver nicotine

In concentrations similar to or possibly higher than delivered in cigarettes

As often preferred by users

The retained dependence on nicotine supporting durable use of vape devices

Instead evidence of “gateway” effect, or prediction of initiation of cigarette use

The presumed net benefit of vaping substituted for cigarette use not established, with long-term population effects of increased prevalence of nicotine dependence unknown

And concerning in the context of known health risks of nicotine regardless of delivery system, including contribution to incidence of type 2 diabetes, increasing in youth

Now, independently in the U.S. and Canada, epidemiological data predicted by those results and links contribute to evidence of failed outcomes, again, for medical industry harm reduction fixes for the non-medical problem of compulsive substance use.