Consistently, obviously invalidating confounding factors are hidden to spin results to unsupportable conclusions, no less lethally than the lies that generated the crisis

A retrospective cohort design examined the effect of MOUD while incarcerated on 12 months post-release treatment engagement and retention, overdose mortality, and recidivism. Individuals (N = 1600) who participated in the Rhode Island Department of Corrections (RIDOC) MOUD program (the United States’ first statewide program) and were released from incarceration from December 1, 2016, to December 31, 2018, were included. The sample was 72.6% Male (27.4% female) and 80.8% White (5.8% Black, 11.4% Hispanic, 2.0% another race).

56% were prescribed methadone, 43% buprenorphine, and 1% naltrexone. During incarceration, 61% were continued on MOUD from the community, 30% were inducted onto MOUD upon incarceration, and 9% were inducted pre-release. At 30 days and 12 months post-release, 73% and 86% of participants engaged in MOUD treatment, respectively, and those newly inducted had lower post-release engagement than those who continued from the community. Reincarceration rates (52%) were similar to the general RIDOC population. Twelve overdose deaths occurred during the 12-month follow-up, with only one overdose death during the first two weeks post-release.

The authors emphasize features of the cohort followed that would potentially benefit from the “comprehensive” correctional-based state program that in addition to provision of substitute opioids methadone or buprenorphine (Suboxone) included:

with “discharge planning with linkage to care after release”

with “addressing logistical issues of a post-release continuance of treatment (place of residence, transportation)”

and “healthcare insurance that covered the cost of MOUD”

The authors interpreted results – “12% decrease in overdose deaths across the state and a 61% decrease in 12-month post-release overdose deaths” – by longitudinal comparison to prior outcomes as remarkable and attributable partly to high rates of community treatment retention over the 12-month post-release period: “72.6% at 30 days and 85.8% at 365 days”.

Most remarkably, the authors attributed benefit to the use of  the prescribed substitute opioids by the cohort, when in fact the obvious confounding factor over the study period – rapidly expanding distribution and use of naloxone to reverse potentially lethal overdoses in Rhode Island – a) more directly and likely accounts for any moderation of lethal overdose rates, b) as an uncontrolled factor at least disallows any conclusion attributing benefit to the medications, and c) provides the most supported explanation of any moderation of  lethal overdose based on evidence presented in the study.

How do we know that?

Rhode Island achieved comprehensive and rapid gains in distribution and use of the opioid lethal overdose reversing drug naloxone in the years just preceding and particularly over the years of the MOUD cohort study, including education on and distribution of naloxone at corrections facilities (RIDOC).

That has included in the timeline provisions in 2014 to support naloxone training and use at community treatment facilities and to establish good faith, “good samaritan”, dispensing protections.

With specific naloxone distribution for the first time targeting community methadone MOUD users, like those in the cohort study – 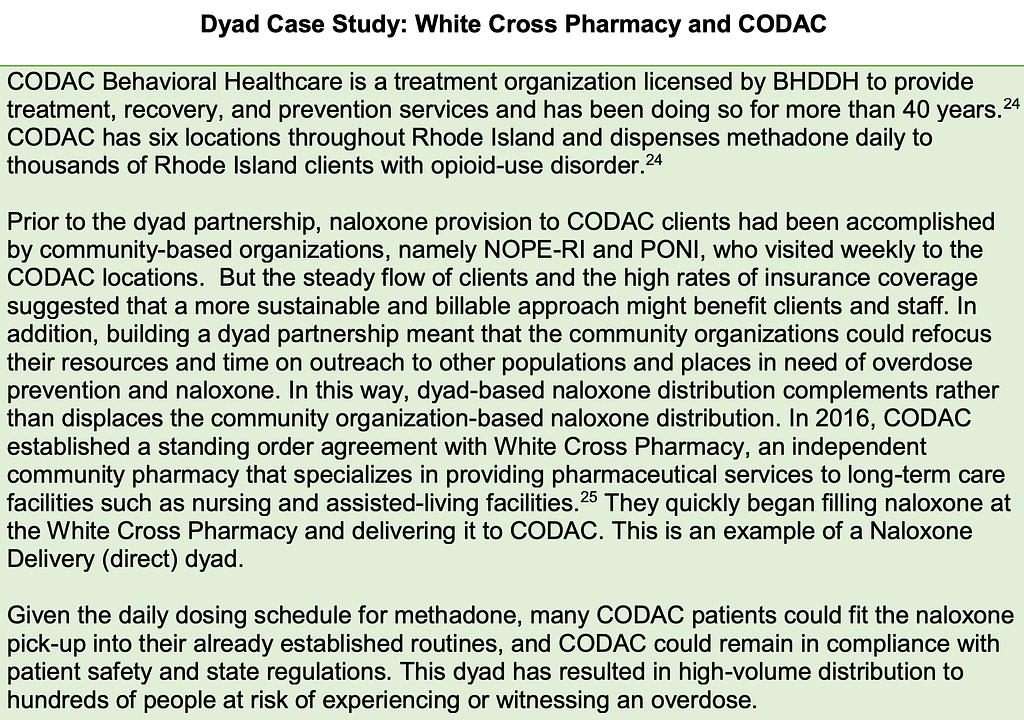 And evidence that due to the emergent comprehensive efforts and programs, the MOUD study cohort would have gained unprecedented benefit in preparedness for use of naloxone to prevent lethal overdose –

Answering this evaluation question entailed both exploring current knowledge of naloxone among high-risk populations, receipt of naloxone as reported by community members and in publicly available administrative datasets, and talking with people who use drugs about the sources and accessibility of naloxone in the community. First, to examine current knowledge of naloxone among people who use drugs, the Evaluation Team utilized data from the 2016 survey of people who use drugs (see Section II for additional details). Among the 150 individuals surveyed, the majority knew what naloxone was (84%) and had been trained to use it (59% overall and 69% of those that knew about it). There were important socio-demographic differences in level of naloxone knowledge. Specifically, there was less naloxone knowledge among people age 18 – 25 who use drugs compared to other age groups. Knowledge of naloxone was higher among people who use drugs who were on parole and those who had ever received medication assisted treatment (MAT), compared to their counterparts who were not on parole and had never received MAT. These more knowledgeable sub-populations may reflect the cumulative effects of targeted naloxone outreach efforts (Protect Families First, PONI work at RIDOC), pharmacy naloxone and dyads (White Cross CODAC dyad), and public health programming on overdose education and naloxone distribution. Seventy percent who knew about naloxone said that they knew where to get it. Of these, the most commonly mentioned places that they would obtain naloxone were pharmacies (49%) and a syringe-exchange program (32%).

The report concludes that –

Community naloxone provision rose rapidly during the evaluation period, keeping pace with the high need for the rescue medication and the high demand for layperson overdose response capacity. In particular, there has been enormous diversification in the naloxone access points in the state, to include pharmacies and hospitals (emergency departments), substance-use disorder treatment sites, RIDOC, law enforcement, and many new community-based organizations.

And more specifically, for the study’s high-risk MOUD cohort –

We’ve painted a picture, haven’t we?

That was needed to dispel the potentially lethal lies that America’s medical/research collusion is compelled to tell, in this case that the study results support beneficial effects of substitute opioids dispensed to problem opioid users. Clearly, that’s at best not supported, as evidence of increased naloxone saves over the study period – saves targeted at high-risk opioid users like those in the study cohort – appear to more than account for any moderating effects on lethal overdose.

It’s important to not ignore the outcome that study participants – receiving MOUD and engaging in community-based MOUD – returned to prison no less frequently than other incarcerated and released individuals. Here’s why.

The prevention of a potentially lethal opioid overdose by naloxone is a relatively simple phenomenon – direct, physiolgical, and directly observable and recordable.

Legitimate attribution of lethal overdose prevention to use of prescribed substitute opioids is entirely different – requiring evidence that use of the substitute opioids decreased high-risk opioid use by protective prevention of abuse of prescribed and illicit drugs by reducing urges, compulsions, psychological/behavioral vulnerability for such use by moderating/improving mood, mental status, impulsivity, and community and interpersonal functioning in ways that lead to avoidance of problem substance abuse. That is, the only way that MOUD by effects of the medications themselves can have benefit is by creating a less stressed, more psychologically and socially rewarding and manageable life for the user.

In this study, the lack of any benefit that was protective against criminal, socially dysfunctional behaviors that resulted in re-incarceration rates no different than for outside the study group are incongruent with presumption of those benefits.

The confounding effect and lethal deception are general and invalidate MOUD

In fact, in the context of generalized campaigns and associations of enhanced naloxone support and provision with engagements in MOUD programming, and generalized expansions of naloxone use since the 1970s, there are no studies that have effectively controlled for the direct effects of increasingly utilized naloxone moderating opioid overdose death rates – that is, no studies with evidence to confidently attribute protective gains to the dispensed substitute opioids.

Most remarkably, the authors attributed benefit to the use of the prescribed substitute opioids by the cohort, when in fact the obvious confounding factor over the study period – rapidly expanding distribution and use to reverse potentially lethal overdoses by use of naloxone in Rhode Island – a) more directly and likely accounts for any moderation of lethal overdose rates, b) as an uncontrolled factor at least disallows any conclusion attributing benefit to the medications, and c) provides the most supported explanation of any moderation of  lethal overdose based on evidence presented in the study.

Saving lives with use of naloxone is a good thing. And, its skyrocketing use that represents increasing demand for life-saving application for mounting  levels of high risk use and overdose by opioids points to  a worsening crisis even as more and more of the MOUD “gold standard”, “life saving” medicines are administered by medical professionals to diseased brains.

Recognition of that deception, the lie that MOUD (aka MAT, OST) is evidenced as providing benefit for high-risk opioid use, as a very lethal deception – exactly as in the never-supported media/medical/research/institutional pure fabrications of safe and effective use of opioids for all pain that generated American Medicine’s opioid crisis – is a first step toward reducing harm and deaths.

We know that because it is established that instead of benefit methadone and buprenorphine (Suboxone) are and have been fueling and driving the lethal epidemic, worsening it, “bupe” especially one of the most plentiful and easily available of diverted, illicit substances “on the street” where it serves as consumable, commodity, and currency in illicit, high-risk economies of lethal drug use.

And we know that because, predictably, over pandemic and now post-pandemic years of relaxed safety controls on dispensing of the schedule II, controlled, addictive, frequently diverted and abused MOUD opioids, high-risk use and deaths tied to them and involving them has increased. See, for example, here and here.

And we know because there has not ever been evidence or cogent thought to support the fabrication that problem substance use, “addiction” is remotely a medical or physical condition, let alone disease, nor psychiatric disorder, nor medically treatable condition of any sort, its fabrication as such allowing out of scope malpractice predicting harms, deaths, and epidemics.

That’s a different type of problem, isn’t it?

About A Critical Discourse
PrevPrevious
Return to Home