Social pathologies including abuse of power to maintain and gain from inequity and deprivation of resources key to health and security reinforce fear-based survival tactics: conformity, thought compliance, and subservient affirmations of fabricated deceptions.

The internet has captured individual behaviors and utterances as public record, globalized group think, and weaponized superego to generate a lethal epidemic of fear of authentic expression and identity, fear of dissent and truth.

All that’s left is that the new epistemology and theory of truth be described and in language that instumentalizes likes, nightly ratings, followers, promotions, search engine metrics, and expert credentials.

The signs are everywhere, from cancel culture to identity politics, to the Orwellian spectacle of collusions of government with social media giants to control undesired speech, to public acceptance – by absence of protest or opposition – of the instrumental value of fabrications, not veracity, creating and defining the “news” delivered by corporate media giants.

From 9-11 to WMD to Russiagate, fear and risk of punishment for deviation from a group’s constructed reality are the inhibitors and drivers. Fear of not fitting in, of no longer being included. The black mark of truth-telling and authenticity can ruin lives and careers. Fear of loss of standing and status with the group is among the most potent remnants of the psychoevolutionary  track of social animals whose very existence, survival, has depended on inclusion, acceptance, conformity to group needs.

Nietzsche’s corollary and transaction – that solitude is the price paid for integrity – may feel less than compensatory for social death, or imprisonment, or loss of means to make a living. There was a time when group think was conceptualized and applied to real groups of persons, meeting together face-to-face and engaging in purposeful discourse toward a common goal.

That time is past as would be evident from any emerging sociological or psychological look at how social media are changing human behaviors.

in that critical developmental period of identify formation and desperate task of replacing the protection and social capital of the family of origin with a peer social group – feel threats to group status and standing so acutely that it too often does become about life and death.

More than adults – like the medical professionals compelled, against all lines of relevant evidence for lack of safety and efficacy, by pressure from peers, hospitals, medical boards to prescribe the opioids that generated a lethal epidemic; like American corporate media safely and comfortably in the role of useful idiots to publicize lethal health misinformation for a pat on the head and a career – young people are vulnerable to the desperate need to not be excluded, not be left out. With potentially tragic results. 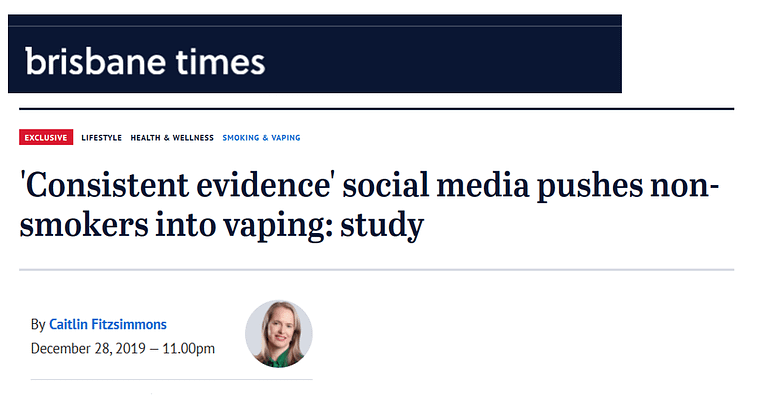 “We found that advertising, social connections and social norms, particularly via social media, influence people to take up vaping,” said Dr Laranjo, both a medical doctor and PhD.

“This is the case not only for people who want to quit smoking – which is supposed to be the primary goal of electronic cigarettes – but also non-smokers.”

The more fearful a world, the more dangerous, the more that individual gain – for standing, connection, capital, protection, survival of the individual –  replaces the social good, the more scarce goodwill and compassion and tolerance, the more wealth, resources and social capital are monopolized and controlled – the more existentially important to fit in, to go along to get along, to surrender authenticity, integrity and personal control of safety to the overwhelming, unconscious need to belong, gained by compliantly producing the needed, accepted utterances and behaviors that allow group dominants to maintain dominance and that avoid rejection.

Wittgenstein’s insight that “meaning is use” has never so acutely described as now the overt disconnection of public utterances, statements, words dissociated from the world of shared experience, coherence, and veracity to serve the function of signification of unthinking assent to protect inclusion and safety. Assent for protection is the use of language, its meaning; whether assent to lethal lies, constructed delusions,  absurdities, or truths irrelevant.

That these forces are overwhelming and driven increasingly by the new sociology of social media seems unquestionable; the measures and symptoms are increasing rates of youth depression, obesity, suicide, and substance use.