At a time when a record number of Americans have died from drug overdoses — with the vast majority involving opioids — the recent approval of two new forms of naloxone, a drug that reverses opioid overdoses, would seem to be welcomed.

Instead, the medicines are opening a fierce debate over whether they could make matters worse.

Critics say the new drugs — which are made up of higher doses of naloxone — are not only unnecessary, but dangerous, arguing that they could cause survivors of overdoses to go into abrupt withdrawal, creating extreme discomfort. Some even go as far to describe them as “punitive” doses that inflict suffering on people who use drugs, and accuse drugmakers of looking to turn a profit without first considering what patients and paramedics need in a crisis.

A somewhat alarmist account at The Atlantic clarifies the concerns. 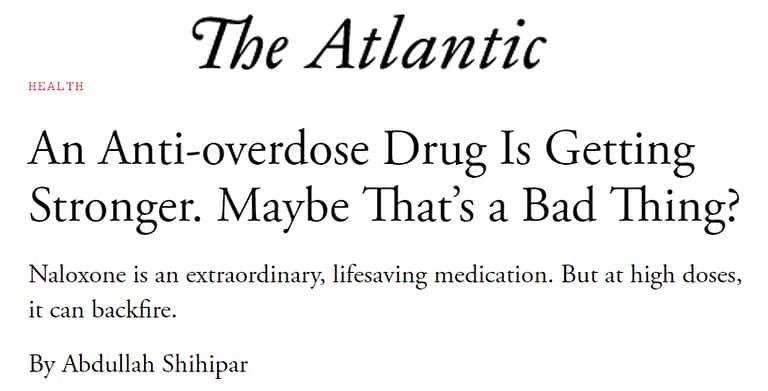 Strong formulations of naloxone may have unintended consequences, says Sheila Vakharia, the deputy director of research and academic engagement at the Drug Policy Alliance, a nonprofit group. When someone takes naloxone and is brought out of their overdose, the experience is not always pleasant. The drug induces the same type of withdrawal that occurs when a person stops taking an opioid, leading to symptoms such as headaches, nausea, vomiting, and sweating. And higher doses of naloxone have been shown to make these symptoms worse (but they are quicker at pulling people out of an overdose). “With some very high doses of naloxone, you can actually be in withdrawal for more than 24 hours and need to seek out additional drugs to try to counteract that effect,” Hill told me.

What’s that? Yes, that is the actual, literal quote from The Atlantic –

“the experience is not always pleasant”

“With some very high doses of naloxone, you can actually be in withdrawal for more than 24 hours and need to seek out additional drugs to try to counteract that effect,” Hill told me.

Huh! You mean like in medically-managed detox for withdrawal from heavy alcohol use or opioid use, as standard practice? Is that what you mean? As if someone were in detox because they wanted help overcoming their dependence that places them at persistent risk of death?

Whereas, after revival from a near-death opioid overdose by naloxone that is pleasant, users predictably access the treatment and supports they need to overcome their opioid dependence and not return to high-risk use? Are not empowered and enabled by naloxone saves that are relatively “pleasant” to continue to engage in high-risk use, confident of repeated relatively comfortable saves?

The intent of opponents of use of higher-dose naloxone formulations by increasingly exhausted and traumatized first responders is clear – to ensure that life-saving use of naloxone is minimally unpleasant for the high-risk opioid user, that is, to protect users from the unpleasant, never lethal, natural consequences of their continued high-risk use.

There is a legitimate concern and discussion to be had

around the possibility of hostile, punitive attitudes held by a responder leading to intentional administration of a higher than clinically indicated dose of naloxone to save a life, driven by frustration and anger.

But not the discussion enabled by STAT or The Atlantic, or that anyone at those outlets, or interviewed by them, or involved in the orthodox, mainstream, usefully shallow noise stream might think, or will ever be found in the matrix of distortions and lies that generated the lethal crisis that got us here and that is the work of the Medical/Media collusion protecting systems whose existence requires the increasingly lethal epidemics.

What is not doubtable is that those first responders across the U.S. and elsewhere, exhausted by the repeated calls and responses, the revivals and repeat revivals, the deaths despite their best efforts to save a life, the same life that may have to be revived tomorrow or next week, OD’d on opioids but what opioids? and how many doses of Narcan to save them? and how much to use? to save them? – that those responders have reasons to feel angry, and frustrated, and likely often like punishing someone, or something.

Reason to be angry because

they are reviving the same individuals repeatedly, with no evidence that despite $billions invested in America’s medical fix for opioid dependence, problem opioid use is decreasing, instead only worsening, and worsening

the drugs that we are assured are effective in treating opioid dependence and managing an increasingly lethal epidemic, like Suboxone,  are found increasingly in combination with dangerous illicit opioids in the bloodstreams of overdose patients and deaths

those drugs, including methadone and buprenorphine, are increasingly diverted, misused, and used as currency in illicit drug economies, including to obtain fentanyl, the most common illicit opioid found in overdoses

misprescription by licensed medical professionals (LMP) of other prescribed opioids is increasing, along with overdose deaths positive for those prescription opioids

while LMP misprescribing of dangerous opioids for pain increased over pandemic conditions, patients were referred to nonpharmacologic treatments without evidence for benefit, while the single treatment supported by evidence for lasting benefit for chronic pain was not utilized by their patients.

“You join the job to help make an impact on people’s lives – not hold them over till their next hit. It’s like watching multiple suicides in slow motion and all you can do is stand and watch from a world removed. At least I have a way out.”

This personal account of a Canadian first responder may or may not be representative.

As a Calgary firefighter, I’ve seen the opioid epidemic escalate from a “new thing” into a full-blown national nightmare. In 2014, I transferred to one of the busier districts in the city, near Chinook Mall where overdoses soon became commonplace.

As the epidemic hit its stride, my crew received a bittersweet letter of commendation from EMS for our performance responding to an overdose. A lifeless body at the bottom of a narrow public stairwell leading to an underground parkade. Surrounded by needles. Taking agonal breaths  as his unconscious body struggled to keep him from the brink. My partner and I, both over six feet, contorted ourselves around him in the claustrophobic corridor, desperately trying to avoid a needle strike as we slid our arms under his limp body to carry him up the stairs and onto a stretcher.

Once there, EMS gave him multiple shots of naloxone. He eventually came back and he was erratic and oblivious to what had just happened. I remember EMS said they’d have to monitor him because they were concerned he’d crash again in minutes from all the drugs in his system. But the sound of distant sirens made him bolt upright.

“The cops,” he stuttered as his eyes scanned the distance. We tried to reassure him it wasn’t the cops and they weren’t coming for him. But, unconvinced, he violently wrestled himself out of the stretcher and sprinted away. If a person refuses treatment, there’s nothing we can do.

People often react to us firefighters like we’re there to judge or get them in trouble. When patients aren’t honest about the drugs they’ve taken, it makes it harder for us to help them — which is what we’re there for — whether that means giving them oxygen until the medics arrive, or doing CPR so they make it to the emergency room.

Some of the people we treated got mad at us for killing their high. That’s one of the more depressing aspects — instead of being aware we just saved their life, they seemed upset they weren’t high anymore.

We avoid thinking about the stories for these patients — it’s too depressing to acknowledge that our work likely has little to no long- term impact.

As I retire after 13 years of service and pivot into a new career, there is plenty I’ll miss about firefighting. All the crews. Firehall life. Being at the centre of catastrophic events and feeling like our interventions were meaningful.

But leaving the front lines of the opioid epidemic is one of the things I’m most looking forward to.

You join the job to help make an impact on people’s lives – not hold them over till their next hit. It’s like watching multiple suicides in slow motion and all you can do is stand and watch from a world removed. At least I have a way out.

The rationale and clinical arguments for continued use of the failed MAT medications methadone and suboxone form a lethal, no-win situation on the streets that victimizes both opioid users and first responders.

Victimizes opioid users by supporting the lies that substitute opioids, or other medications, or any medical approach for the non-medical condition of substance dependence can benefit them. It diverts and distracts them from actual evidence-based treatments that are effective in overcoming problem substance use. It robs them of the critical factors required for change – motivation and self-efficacy. And it robs them of the potentially motivating factor of experiencing a natural consequence of their problem opioid use – the very uncomfortable and never lethal experience of withdrawal.

Victimizes first responders by fueling with prescribed medications an increasingly lethal epidemic that forces them onto an impossible war zone where they must second-guess their mission to save lives against charges that they will create unnecessary discomfort in attempting that, a death zone where they are persistently traumatized with no sign of relief.

It should be criminal.