PANDEMIC OPIOID DEATHS DUE TO INCREASED ISOLATION? HOW POSSIBLY TO EXPLAIN CONSISTENT INCREASES IN CALLS FOR EMERGENCY RESPONSE?

Consistently, calls for Narcan response to revive opioid users in overdose increased over the pandemic, requiring presence of others, not isolation

This recent post describes direct evidence in peer-review, published studies disconfirming a role for social isolation in the persistently elevating toll of overdose deaths tied to high-risk opioid use.

The assurances, forming a consensus that Goes Without Saying –

are that it’s been pandemic-forced social isolation, the physical social distancing causing isolation, that has generated acceleration of overdoses and deaths that would otherwise have been prevented.

Right. Did that ever make sense?

On the street, in the camps, in the parks, sitting, huddling, using opioids 6 feet away from others instead of 4 feet, or 3 feet away? That created significant changes in risk of not being observed as in trouble and responded to when needed? 2 or 3 feet?

What about users who are not homeless, that is they have a home, apartment, a room with a bed somewhere. Pre- and during pandemic, their behavior and location for using would change? If users were pre-pandemic in social work settings or at treatment centers, is that when and where they would administer opioids in ways that placed them at risk of overdose? Such that whereas pre-pandemic, significantly higher numbers of overdoses could be responded to because users were using in risky ways in those settings – in the office cubicle next to yours, at the treatment center – instead of other settings where they could use without risk of detection or jeopardizing work or program status? Instead of the same settings they would continue to use in during pandemic stay-in-place restrictions? That makes sense?

Fortunately, there is objective evidence allowing evaluation of these unsupported claims that by repetition and group think became “truth”, became consensus precisely by virtue of their necessity as distractions.

based on data from a regional public health service, chief coroner’s office, and forensic pathology service contributing to the report that examined opioid deaths in 2019 and 2020. Between March 2020 and December of 2019 opioid deaths surged, increasing by about a thousand, compared to the same time period in 2019 — an increase of just over 75 per cent. And, based on the report, “about three-quarters of people die of opioid overdoses alone — a statistic that has not changed during the pandemic”.

“a statistic that has not changed during the pandemic”

Another form of objective evaluation of the social isolation claim uses called-in emergency responses to opioid overdoses as a measure of presence of others at an overdose, versus no others with an overdosing user.

Consider calls to emergency responders for apparent overdose, with response and administration of naloxone for revival. Think about it just a minute. How frequently are those calls for help made by the opioid user herself or himself in distress – with loss of alertness and attentiveness sufficient to require an EMR overdose response – almost never of course.

Made by others, others nearby enough to perceive a user is in need of emergency response. If social isolation is a  explanation for the surge in OD overdose deaths, that would be reflected in a temporal stalling of prevalence of calls to emergency response for apparent overdose, or a decrease, and corresponding closely in time to onset of pandemic social and physical restrictions. Certainly not an increase in numbers of calls for emergency response, representing increases in social detection of opioid users in distress and invalidating the necessary fabrication of social isolation as explanatory.

What do you think that has looked like pre- and during pandemic conditions? There’s plenty of data out there. It’s been available for months and longer.

Here’s one example, from a report from Florida, where opioid overdose calls were “up 40% during COVID-19 pandemic”. 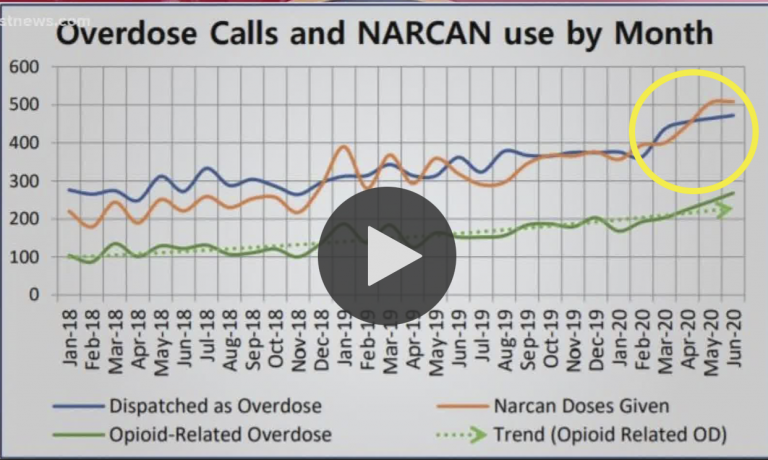 Here’s another, from Vancouver, B.C. –

We have the reports from British Columbia and from Florida that are inconsistent with any social isolation explanation. It looks like the same is true for the Houston, Texas area.

And from a report for San Francisco, California,

Officers reversed 148 overdoses through July 29, with 98 of them in the Tenderloin. Five years ago, San Francisco police reversed just three overdoses around the city during that same period.

The headline: Naloxone, known by its brand-name Narcan, has been a difference-maker.

“We saw a huge increase in how often it has been administered in the last five months compared to last year at the same time,” Lane said.

Data came from two programs that report whenever they deploy the drug to stop an overdose. Use by law enforcement officers went from an average of 13 saves a month in the March-July period last year, to 34.2 during the same five months into 2020.

Deployment by emergency medical services went from 202.8 saves last year to an average of 269.6 per month this year.

It clearly shows the need for Narcan is up, but it also led to a surprising positive.

And it seems to clearly show that social isolation was not a factor that placed users outside of proximity to others who would call in an emergency response.

More than 550 cases required Winnipeg Fire and Paramedic Services to administer naloxone — a drug administered to block the effects of an opioid overdose — between Jan. 1 and June 27 this year, the highest on record according to the August 2020 report. Apparent opioid overdoses reached all-time highs in May and June with more than 150 cases recorded each month.

More than 90 per cent of opioid overdoses were reportedly attributed to non-pharmaceutical opioids such as fentanyl, heroin and “down.”

By contrast, the first six months of 2019 saw 212 opioid-related drug-harm calls, according to annual WFPS data, already a sharp increase from 64 calls in the first half of 2018.

WFPS reports administering naloxone to 909 patients thus far in 2020, already above the full-year total of 789 patients in 2019. 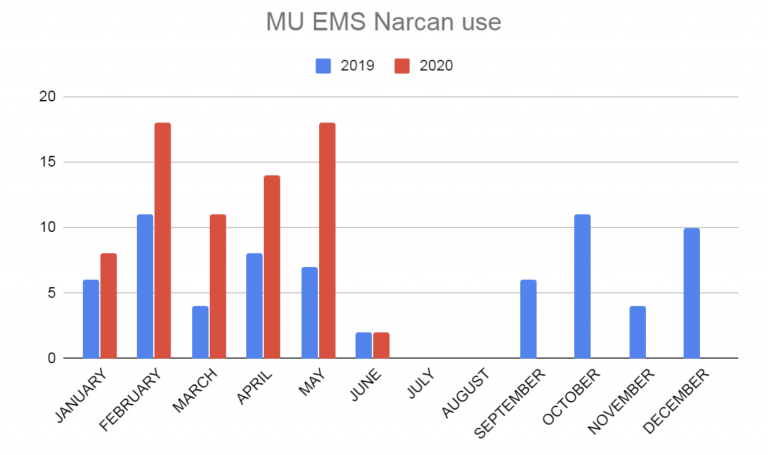 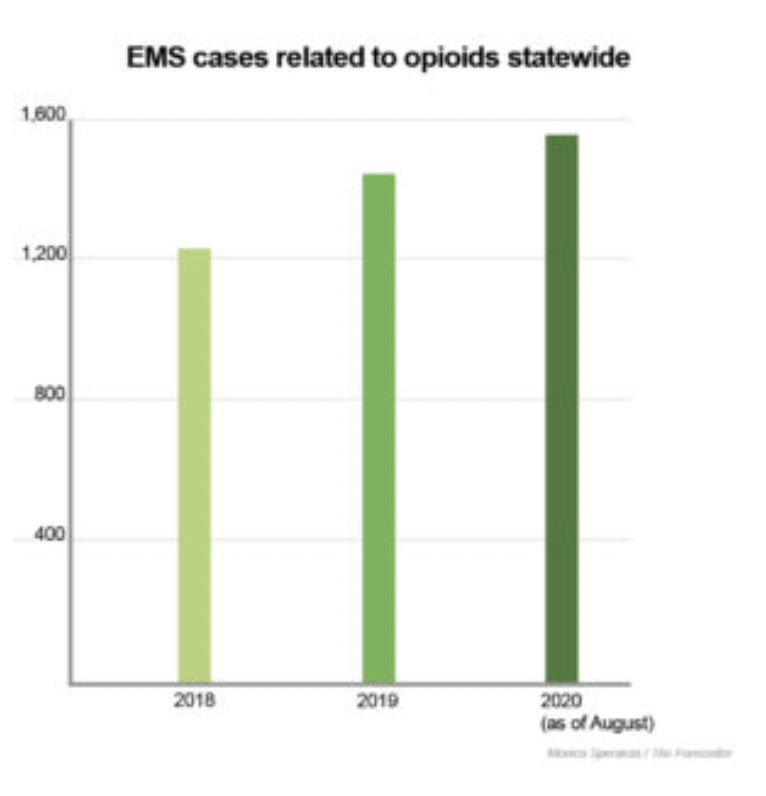 had matched then surpassed  those of 2019 by May and June, a few months into the pandemic. 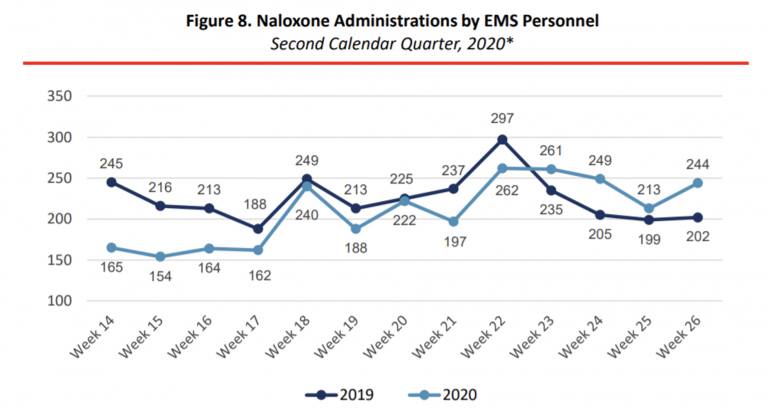 In Boston over early months of the pandemic, calls for emergency response

to opioid overdose appeared to be no different or slightly greater than pre-pandemic, disconfirming significant effects of social isolation on lethality of high-risk opioid use.

Boston EMS response data show calls for narcotics between March and August are roughly the same when compared to the same period last year, even slightly lower. A 4.5% increase in naloxone administration since March is a smaller bump than seen in other recent years as use of the life-saving opioid reversal medication has increased, according to data provided by the Boston Public Health Commission.

In Connecticut, opioid overdose responses by EMS or bystanders

And in Duluth, Minnesota, 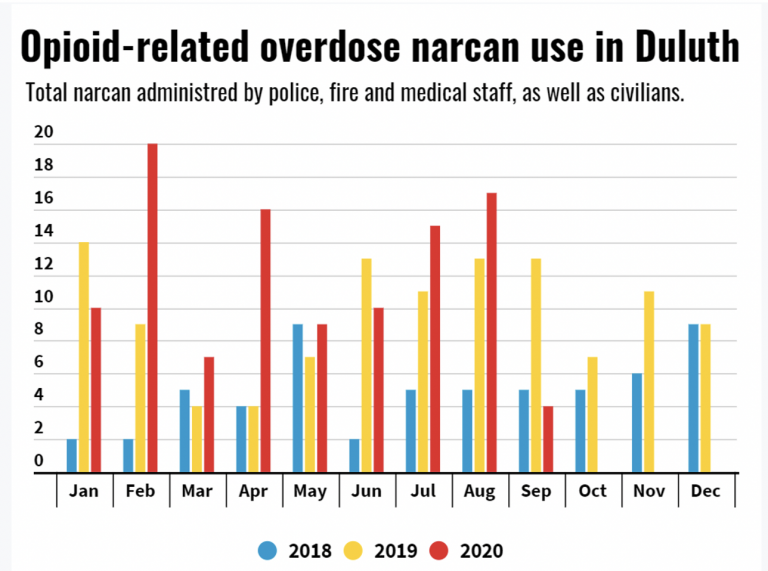 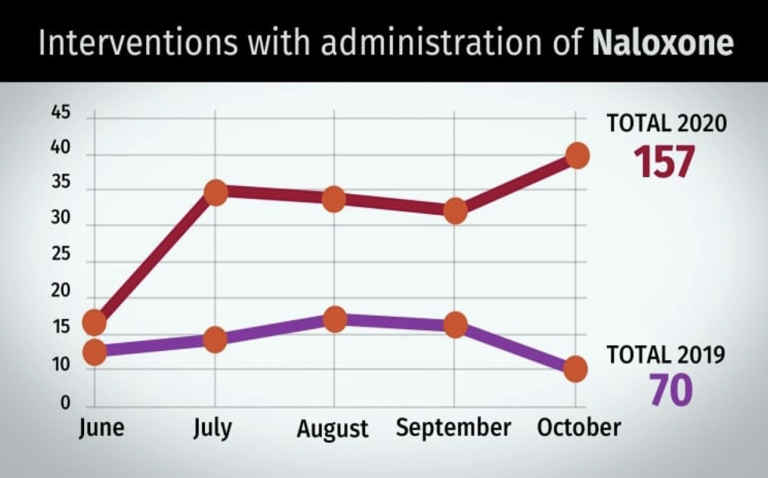 Data shows that suspected fatal opioid overdose calls to paramedics were up 90 per cent in 2020 than the previous year.

to opioid overdose appeared to be no less frequently triggered than in prior years, again disconfirming significant effects due to the fabricated social isolation effect.

There may be counter-examples published and available;

if so it will be important to consider them.

This post does not represent results of a comprehensive literature or research review, instead a presentation of results that have come up and been noticed in infomal Googel searches.

The results are consistent with predictions of effects based on critical thought applied to hypotheses about COVID pandemic and related restriction and social stressor effects on human behavior, on established protective factors predicted from decreased exposure of substance users to American “treatment” for substance use and its associated religious subculture; and on additional factors.

The pattern appears to be generalized and significant, forming a second type of objective evidence disconfirming the fabricated, necessary social isolation account for surging opioid deaths over pandemic months. The first outlined type of evidence, here, consists of surveys and reports of circumstances documented as associated with lethal and non-lethal opioid overdoses over pandemic versus pre-pandemic conditions.

There is emerging a third type of objective evidence

disconfirming – giving the lie to – that fabrication: reporting on continued, persistently mounting opioid-involved overdose deaths and non-lethal overdoses now, after pandemic stressors, restrictions, and imposed isolation have dissipated or moderated, with results as predicted.

Results discerned, for example by  Dr.Dr. Matthew Christiansen, director of the Office of Drug Control Policy for the Department of Health and Human Resources in West Virginia. In his state, where rates of opioid injection HIV cases are increasing as access to MAT medications has also increased, he notes that, “As COVID lockdowns have been rescinded, we’ve continued to see that rise in overdoses”.

That’s not supposed to be happening !

Because, after all, there has been a perfectly unified consensus among America’s top trusted medical, public health and media authorities that those very factors  that are now dissipated – isolation, economic anxiety, other stressors – over the pandemic explained, caused, the persistent surges in high risk opioid use, overdoses, and associated morbidity and mortality.

What else could it possibly be, continuing now post-pandemic to drive opioid deaths ?

We know the cause is not fentanyl itself, apart from its use by choice or at known risk, the synthetic opioid that is established as increasingly sought out, replacing heroin,  used at known risk of being an additive to other street drugs, representing high risk opioid use – high risk, potentially lethal opioid use that any user could easily stop simply by starting on American Medicine’s widely available – by prescription or on the street – cure for high risk use: Suboxone. Fentanyl, far from an unpredictable, unknown, unavoidable contaminant, is sought out or used at known risk, the new heroin, giving the lie to the false promise of MAT.

Is it possible that continuing increases in opioid-related overdoses and deaths while pandemic stressors have dissipated is generalized, a pattern, pointing to causal factors other than those fabricated by consensus?