A year ago and a year into Oregon’s promise to voters to use Measure 110 funds to usher in effective treatment that would elevate state addiction treatment outcomes from among the worst in the nation, results were grim and predictable. Predictable for anyone with competence in the field of substance use and its treatment.

Here’s how media have covered the doomed implementation of the changes voters trusted Oregon’s legislature, health authority, and treatment experts to bring to a state with among the most devastating substance use problems.

From an AP/local abc affiliate report –

SALEM, Ore. (AP) — Two years after Oregon residents voted to decriminalize hard drugs and dedicate hundreds of millions of dollars to treatment, few people have requested the services and the state has been slow to channel the funds.

When voters passed the state’s pioneering Drug Addiction Treatment and Recovery Act in 2020, the emphasis was on treatment as much as on decriminalizing possession of personal-use amounts of heroin, cocaine, methamphetamine and other drugs.

. . .  But Oregon still has among the highest addiction rates in the country. Fatal overdoses have increased almost 20% over the previous year, with over a thousand dead.Of 16,000 people who accessed services in the first year of decriminalization, only 0.85% entered treatment, the health authority said. A total of 60% received “harm reduction” like syringe exchanges and overdose medications. An additional 15% got help with housing needs, and 12% obtained peer support.

. . .  Under the law, people receive a citation, with the maximum $100 fine waived if they call a hotline for a health assessment. But most of the more than 3,100 tickets issued so far have been ignored, Oregon Public Broadcasting reported. Few people have dialed the hotline.

That’s right, 0.85% means less than 1 percent. Engagement in treatment by less than 1 in 100 Oregonians encountering the new Measure 110 processes envisioned by implementors of Measure 110 to lead them into treatment.

That’s the 2-year “rocky start”, but hopes are up,

it’s right there in the headline, so there must be evidence for progress.

Steve Allen, behavioral health director of the Oregon Health Authority, acknowledged the rocky start, even as he announced a “true milestone” has been reached, with more than $302 million being sent to facilities to help people get off drugs, or at least use them more safely.

. . .  Tera Hurst, executive director of Oregon Health Justice Recovery Alliance, which is focused on implementing Measure 110, said coerced treatment is ineffective. Hurst said it’s important to focus on “just building a system of care to make sure that people who need access can get access.”

. . .  Allen called the outlay of million of dollars — which come from taxes on Oregon’s legal marijuana industry — a “pivotal moment.”
“Measure 110 is launching and will provide critical supports and services for people, families and communities,” he told the Senate committee.

That’s a very brave face Oregon Health Authority’s (OHA) head Steve Allen is putting on the efforts of Oregon Health Authority to implement the changes voters are expected. Efforts including populating implementation committees with  individuals with no competence or qualifications to contribute to those determinations, but as peers and with “lived experience”, that is histories of problem drug use.

Those peers, with employment positions in Oregon’s cronyism treatment systems,  were able to function effectively in closed-door meetings with legislators soon after 110 passage in order to remove clinical standards in the measure as passed and intended but that would have been a barrier to more hiring of peers in cronyism systems. That’s how that works.

Some of the first use of Measure 110 resources was to hire more peers, but unfortunately that hasn’t gone so well. As described here and reported last year by OPB –

The recovery community individuals and organizations are highly competent at something else: protecting, including in closed-door meetings with Oregon legislators, access of members of their organization to cronyism employment in Oregon’s sham addiction treatment industries.

Some of those employed, with public funds, are “peer support specialists”, their paid employment predicting perpetuation of worsening substance use epidemics, as explained here and here.

How’s that going these days, the work of paid peers promoted as effective and important by “recovery leaders” (former drug users who have worked to ensure Measure 110 funds continue to fund failed systems that provide cronyism employment to other members of their “recovery community”) ? Not so well, as reported by NPR. So many of these addiction treatment professionals are returning to problem drug use themselves, that their positions are unfilled. Who could have predicted that?

In fact, some groups say they’re having trouble finding enough peer counselors because so many are back using.

“The relapse numbers have gone up so much,” says Elly Staas with the 4th Dimension Recovery Center in Portland.

But I’ve digressed. Where were we?

What about those $millions in public healthcare dollars

now being distributed to longstanding treatment systems at this pivotal moment?

From consistent reports, Measure 110 funds will go to existing treatment programs, those “facilities” noted by OHA head Steve Allen, that is, to the failed, sham systems that as lethal parodies of effective, evidence-based treatment have been driving Oregon’s substance use epidemics for decades, driving them to the bottom.

So far, most of the new funding has been allocated to harm reduction strategies like naloxone distribution and needle exchanges, necessary to slow the continuing surges of drug-related deaths and disease, and not treatment at all, instead damage control and tragic measure of the lethality of Oregon’s commitment to failed treatment systems.

Safe housing is an effective use of funds, or would be if effective treatments were accessible to protect against return to problem substance use.

“Peer support” is part of Oregon’s cronyism treatment system in which individuals “in recovery” are provided salaries without any capacity to provide treatment or support for vulnerable Oregonians struggling with potentially lethal substance use, instead with the demonstrable function and role of funneling at-risk Oregonians and their healthcare dollars into the sham, failed systems perpetuating substance use, harm, and profit. Their salaries paid with public healthcare funds. That’s how that works.

And that places in context the comment of Terra Hurst, a member of Oregon’s recovery community and conveniently appointed by Oregon Health Authority to involvement in Measure 110 implementation. The recovery community comprising that cronyism system and depending on the diversion of Measure 110 funds to longstanding, failed treatment systems perpetuating epidemics in order to protect their cronyism employment positions. That’s how that works.

Tera Hurst, executive director of Oregon Health Justice Recovery Alliance, which is focused on implementing Measure 110, said coerced treatment is ineffective. Hurst said it’s important to focus on “just building a system of care to make sure that people who need access can get access.”

A system that no one is accessing, despite daily risk on the street of death by overdose, by fentanyl. A system that has failed Oregon for decades, taking Oregonians in need to the lethal bottom. And, as demonstrated by the Measure 110 experiment, is being rejected by those who know it best and are most vulnerable, most in need.

But that’s not the point for the forces driving implementation. It’s protecting the cronyism system, tied to a toxic religious subculture,  that has been driving Oregon’s lethal sham treatment programs for decades.

Here’s what Oregon Public Broadcasting had to say –

That’s progress! Or . . . would be, if the subheader assertion were not a lie.

What new treatment options are now available to Oregonians since passage of 110? Or are even being considered as being supported with 110 funds by Oregon’s OHA, experts, and implementation committees?

Right. See above, under, “What about those $millions now being distributed”.

One media outlet was less reckless and more direct –

Nearly two years after passing a ballot measure decriminalizing drug possession, Oregon is now seeing a sharp rise in drug overdoses and deaths, leading many to conclude that the state’s policy is a failed experiment.

From accounts, the expert and other testimony in the Oregon Senate Committee on the Judiciary and Ballot Measure 110 Implementation constituted a barely sensical performance of non sequitur and transparently impotent rationalization.

There were the standard, persistent laments that attribute worsening lethal crises to lack of resources to fund more staff and capacity for Oregon “treatment” programs. Juxtaposed with uncontestable observations that, in fact, freed from compulsive enrollment in those failed systems, NO ONE IS COMING IN FOR TREATMENT. Certainly not Oregonians who would benefit most from real, evidence-based, effective treatments, who are most vulnerable, most at risk of death.

As Expert Keith Humphreys put it, there has been “not much treatment seeking”. What he meant to say, of course, if he had had the courage to do so, is that there has been avoidance, rejection of longstanding treatment systems. Aversion.

Oregon Expert Todd Korthuis  rationalized increasingly lethal outcomes as attributable to “our addiction treatment system has just been outpaced by these trends”. It’s not clear which trends Dr. Korthuis was referring to, as overwhelming treatment systems, in the context of Oregon’s most vulnerable substance using population avoiding that system over the past two years.

Both Experts testified that Oregon must move back to mandating, coercing, or otherwise compelling vulnerable substance users into treatments. That’s something that, in fact, no professional with competence in the field would recommend based on established, predictable countertherapeutic forces and factors indicating against it. It predicts treatment failure. 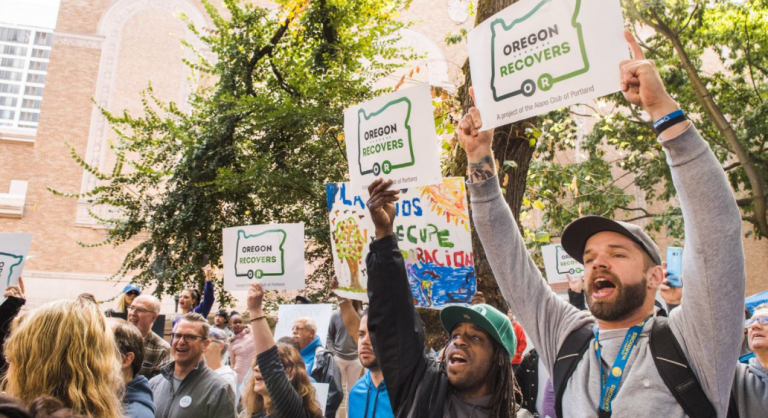 Experts and beneficiary stakeholders: There must be more money and faster to expand treatment capacity to meet our pressing needs to serve Oregon addicts and employ members of our recovery community.

Media: Hopes Up in Oregon

Oregonians at risk of harm and death: No thanks, we don’t want your bogus, sham treatments that took Oregon to the bottom. We’ve tried them.

Your system is a lie.