YOUTH VAPING AND NICOTINE-DIABETES LINK: NOT GOING AWAY

The direct link explains doubling of youth prediabetes rates not explained by obesity, warnings provided media 4 years ago continue to be ignored while vaping still surges

A month or so ago, a flood of media headlines

heralded a stalling or decrease in use of nicotine by vaping (e-cigarettes) among American youth. Paragraphs down, typically, the source of the data was reported as being for 2020.

The leveling of youth vaping in 2020 is easily understood as tied to pandemic conditions: closure of schools; quarantine in place; young people unable, unwilling, or disallowed to congregate in places where they had been to engage in what is largely a social behavior for them; at home challenges to vape nicotine without detection and undesired consequences. And, possibly some inhibitions about inhalation of any substance in the context of COVID-period campaigns based on fear.

Those transient effects were seized on as representing broader trends, and they don’t.

From a local report –

SAN ANTONIO — Vaping among children may have lost its news cycle, but its lure remains intact, and some believe it grew.

“The first thing that’s important to realize is that while the headlines are gone, we still have a youth e-cigarette epidemic,” Matt Myers said.

Myers is the president of the Campaign for Tobacco-Free Kids. His organization and the National Association of School Nurses want the Food and Drug Administration to ban flavored e-cigarettes.

“As kids are coming back together, the data is showing increased sales of the very flavored products that kids use,” he said. “Which is why we’re so concerned.”

The groups point to FDA and CDC-sponsored data from the 2021 National Youth Tobacco Survey. According to the survey, over two million kids in middle and high schools use e-cigarettes regularly.

Vaping nicotine by youth did grow, “despite leveling off in 2020 during the earlier part of the pandemic” according to the National Institutes of Health.

Vaping: Nicotine vaping in the past month increased significantly among young adults in 2021 despite leveling off in 2020 during the earlier part of the pandemic. The continued increase in 2021 reflects a general long-term upward trend: in 2021, nicotine vaping prevalence nearly tripled to 16% compared to 6% in 2017, when the behavior was first recorded.

As covered by Health Day –

Megan E. Patrick, Ph.D., from the University of Michigan Institute for Social Research in Ann Arbor, and colleagues examined young adult substance use prevalence and trends since 1975 in the Monitoring the Future panel study. Participants were first sampled in 12th grade, corresponding to age 18 years, and were then surveyed every other year through age 29/30 years.

As youth vaping of nicotine continues to surge, so does risk of  prediabetes and diabetes due to the established, direct relationships with nicotine.

As predicted, large increases among youth in use of nicotine by inhalation as use of e-cigarettes (vaping) has surged are associated with newly reported doubling of teen prediabetes prevalence over the same period. That was foreseeable based on the direct link between nicotine and risk of diabetes onset, as explained here at A Critical Discourse beginning in August of 2018 and in posts repeatedly after that. The new report follows publication of the same predictable results for adults four weeks ago, described here.

According to National Health and Nutrition Examination Survey (NHANES) data on over 6,500 youth, the prevalence of prediabetes increased from 11.6% in 1999-2002 to 28.2% in 2015-2018, Junxiu Liu, PhD, of Icahn School of Medicine at Mount Sinai in New York City, and colleagues reported in JAMA Pediatrics.

Some of the sharpest spikes in prevalence occurred in youth with obesity. Increases across BMI groups form 1999-2002 to 2015-2018 were:

That’s a distortion of the results. For kids with obesity, the prevalence about doubled, that is, increased by a factor of 2.2. For overweight kids, prevalence was close to doubling, a factor of 1.8.

An exact doubling would be an increase by a factor of 2.0.

And for kids underweight or normal weight, the increase in prevalence was greater than for overweight or obese kids, 2.6, or a factor of slightly more than two and a half.

That is, the spike in prevalence of prediabetes for youth over a period of surging use of nicotine by vaping was not accounted for by obesity. The increase was about as much for overweight as for obese (a higher BMI than overweight) and was, notably, highest for kids who were normal weight or underweight. 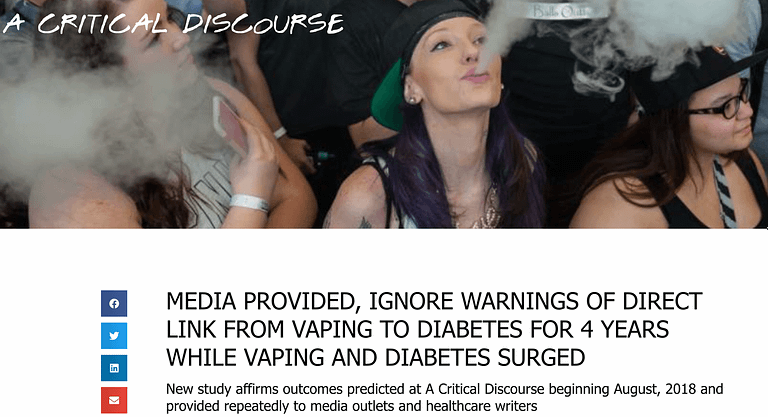